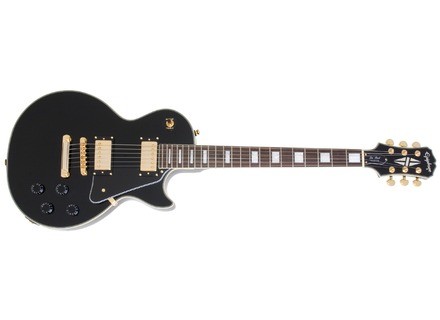 View other reviews for this product:
The Epiphone Les Paul Custom is a reissue of the classic "black beauty" guitar that was made in the late fifties, and then from the late sixties onward. The Gibson version sells new for almost $4,000, so this guitar is hoping to give players the option of having that general look and tone for less cash. It features a mahogany and alder body, set in mahogany neck, Grover tuners, tune-o-matic bridge with stopbar tailpiece and a pair of Epiphone medium output humbuckers wired to a typical Les Paul configuration of dual volumes, dual tones and a pickup selector switch. The current models are made in China.

The design of this guitar isn't the most ergonomic in the world to me. I find a lot of the Epiphone Les Paul copies to be heavier than I'd like unfortunately. That being said for some players the weight is not a problem. The other big issue for me is the bulky neck joint, but that's the case with the LP design in general, not just this model. The upper fret access is affected by the neck joint, but if you've got big hands and/or long fingers you might be able to get around it a bit easier. Getting a good tone out of this guitar is pretty easy. The stock pickups aren't the best, but the tones when you plug it in have a nice thick vibe that is a bit less bright than a Les Paul Standard with its maple cap.

This guitar is meant to ape the tones of a classic Les Paul Custom which was always a darker and thicker sounding instrument than a Les Paul Standard. Granted, the woods in this guitar are not the same entirely as a real Gibson LP Custom, but it still seems to have that darker sound in its DNA somewhere. It works quite well for jazzier clean tones or more fluid/thick drive tones I find. It's also great for riff rock too because of the nice low end. The stock pickups are okay, but I've had better luck hearing this guitar with some better quality pickups like DiMarzio Super Distortions or Duncan Customs. Swapping out the pickups bring out more harmonics and really liven things up for my ears. Given how much cheaper the guitar is, you could upgrade the electronics and still save thousands...

All in all I think the Epiphone Les Paul Custom is a decent way to get into a Les Paul Custom type guitar for not a lot of cash. They are about $500 new which is a fair price given the features and tones you can get. Compared to the $4,000 for a Gibson Les Paul Custom you are really saving some coin to get this one, but they are much less consistent than the Gibson models, so you may have to play a few before you find one that speaks to you.
Did you find this review helpful?yesno
Cookies help us improve performance, enhance user experience and deliver our services. By using our services, you agree to our use of cookies. Find out more.