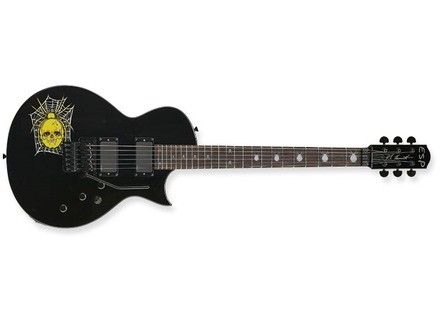 KH-3, LP-Shaped Guitar from ESP in the Kirk Hammett series.

View other reviews for this product:
-d'aprs I know it would have been manufactured in the United States ..

-the skyscraper has 24 frets, otherwise cot microphone was 2 EMG81 active in bridge and neck course!! with a spr volume for each microphone 2 and a knob of Tone classic ... what .....

bah-if not for the bridge, there is a super original floyd rose ... not a floyd under license ... a real floyd ... that holds great and easy to regl ...

-as said above .. 2 separs volumes for each pickup and Tone .. .. .. I just add a selector 3 position much like the Les Paul (I do not know if that's clear? )dropoff window

-if not handle screwed D is super nice and fast, super convenient trux that allows access to acute ais is the fact that the plate on the back of the guitar that secures the heel of the neck n ' is parrallel to the body but is inclined ... which seem to have removed the item on a wall but when you go up the 24me box ....

-The handle as stated above is really great .. agréble a highway at high speed (radar less), whatever ultimately more typ Gibson to form and touch ...

- Again as said above the access to acute is really simpa thanks to the mounting plate tilts ...

-a very bonn ergonomics at the really nice handle feels has immediately comfortable (unless not already have this kind of frequent scratching)
on the other hand is quite heavy .. some say may be too ... but at the same time it is a guarantee of quality ... it's not against the plat ..

-the sounds are not difficult to have ... well, you still have to have the abitude screaming sounds with the mic easel ... otherwise there must master the knob to get all the sounds you want

I have used it with a preampi tubefex home peavey (great by the way) which also serves as my multi-effects ... and a power amp peavey classic 50/50 if cot classic sound effects ... shred:

-mainly the sounds I research are clear and precise saturated sounds (which implies less saturation recess ....)
So on my preamp I utiliste the crunch channel with saturation background, high sito pad, a light overdrive a delay, reverb, compressor, noise gate and voila .... it's a sound that saustain is rich in harmonic killer in long alternating frases year but already harder to negotiate in legto = s is its only incovenient at the same ca ..... probably comes from me = '(
-the sonorities that I prefer are probably the lead sound of the metal shred ... sounds too ..... sounds clear enough cristalins .... *

I hate those, there's not much but still, it's ... just clean sounds with the bridge pickups is so garish that with clear sound and the knobs thoroughly it sounds oddly ... a slight resemblance with a banjo =) .... notice those who are amateur ... (which is not my case)

-I use it now for one year

-in fact I had never tried this guitar Advent buy .. (am I crazy?) I'm actually a big fan of Metallica so I naturally tourn to ESP ... and then when I I saw this guitar for sale ... love at first sight ... especially since she bought at auction beforehand t in England ... because it would have belonged to him even Kirk (Kirk hammet. .. metallica lead guitar for those unfamiliar ...) and he dedicac ... (I am also always cleaning the gaffe was not to remove his signature = p)

So if I had tried a lot of Advent jackson ... of course fenders for fun =) and also Vigier (indeed it is not to advertise but vigier is frankly super .. .;: super class finishing too well ... .. DETAILEDREPORT handle carbon partially quite different round of the kh3 .. but really very class .. but unfortunately not free is reason laquelles tent I have my chance kh3 of the cost of this and I do not regret it ... because this guitar is great ... just like Vigier I would buy one of those well as 4.!:!

report quality price really good without being either extrasuper great ... but hey .. great for a guitar pro 1600 (Cygnus course) it's worth even as the cost ....

-uais frankly I think without a doubt I would buy this guitar !!! no hesitation ... whatever actually I would prefer to win the lottery to pay me the one and Vigier Excalibur supra =) !!: !!!!!
See the source
Did you find this review helpful?yesno
Cookies help us improve performance, enhance user experience and deliver our services. By using our services, you agree to our use of cookies. Find out more.