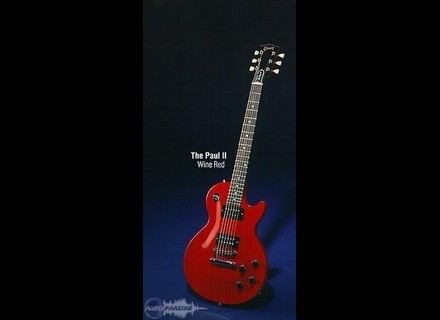 View other reviews for this product:
Makes the United States in the late 1990's this guitar has all the BASIC SPECIFICATIONS a high-end Les Paul. A beautiful varnished mahogany body worthy of the finest, microphones dune Les Paul Custom, the button slecteur microphone, placed in the upper body and not the version as lconomie The Paul Previous prs o It is placed buttons SETTING THE volume. The handle is her dowry lgrement narrower frets and inlays that did the rounds against trapzodaux his ass. The head is about the same as that of high-end MODELS with superb mcaniques (mcaniques The most beautiful in the world, Daprai me) in tulip-shaped button .

A regular freight lgrement wider, I have a few minutes to adapt the frets a little thin, but once my hand accustomed to silent, jai proved the same ease of play as a MODEL upscale profile of the handle as the same. CCAA acute as it is facilitated by the large thickness less than a Les Paul Standard, without achieving a lon laisance that double notches on a guitar. But since I never play on the 24 th box (quil nya not), I stay up the 20 th for me CCAA acute is satisfactory. Lergonomie is superb, this skyscraper is played with ease both sitting and standing. Sitting on call round the curve of the lower body between her thighs and the handle is oriented linclinaison pushing with his forearm on the top curve. Standing, as it less than Paisse The models most coteux cest endless fun to play with such a scraper. For sound, it is impossible with closed eyes to make the difference between sound dlivr this 2 The Paul and Les Paul Custom, the same microphones, the restore lidentique m my sounds.

The two that Paul should, thanks its exceptional microphones, all styles of music, it excels everywhere. In jazz it sound velvety hard rock it saturates itself in its clear she is hot, not aggressive while slamming trs well. I plugged into a Marshall JCM is the perfect couple, not a bad sound out.

I bought this instrument there is a ten year and since it is one of my guitars prfre, for all the reasons numres above.
Its maneuverability makes my guitar bedside ct the place of my bed I'm working on the songs in the evening or morning.
I find the quality price ratio so that jai poustouflant later bought two other models The Paul, which allows me davoir DIFFERENT tunings while having the same sound, the one is given in open tuning of r and lautre a semitone above the Tone for the disc on some tracks. For the price of a Les Paul Custom 3 The bag can be Paul. Cest guitar musician par excellence: not worth breaking the bank for the top of the sound, playability and more. Gibson does not manufacture more dailleurs this beautiful guitar, they realized that their high-end parasites that for tenders bodies as beautiful with high quality microphones. Their entry-level Les Paul is particulirement ugly today in 2006, I think of the MODEL VIXEN, or in the years to pass the Voodoo MODELS, all in black which allows use less beautiful wood quality. This instrument is the guitar that every guitar player base should have in its range, the sound GIBSON as needed regardless of the directory that plays lon
See the source
Did you find this review helpful?yesno
Cookies help us improve performance, enhance user experience and deliver our services. By using our services, you agree to our use of cookies. Find out more.