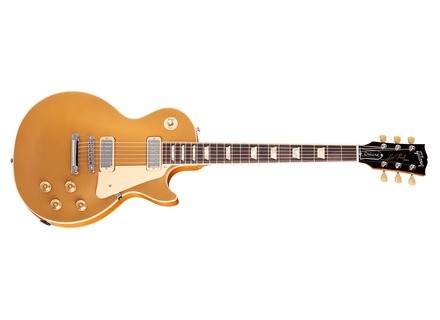 View other reviews for this product:
It's a Les Paul! Color is my prefers after the sunburst

This is a Les Paul, there is no doubt pickaxe handle, limit access to acute but sufficient for most musical styles, but heavy balance. The color is nice but not "top" finishes precisely on mine, which dates from 1973, is Mtal "stung" the curd varnish is a green color appeared between the microphones and slecteur the start of the handle, can be due to oxidation due to perspiration flowing during concerts? it's true that 10 years of use, it has seen all the colors ...
the mcaniques are not the strong point, I have exchange for Shaller.

Aw! the sound of the mini humbuckers! this is the reason to buy this guitar (or at least try ...). For rsumer is as hot as a P90 but with more mdium-acute, more shine, besides what is the cause of unwanted feedback when playing a consquent level (j ' I lost 30% of acute dj has left ear, but it is not the only cause).
Anyway this guitar is the most versatile of the Les Paul for my taste, from clean to saturated it's magic (can not be for the mtalleux + trash, goth and others).
Of course it's "mate" has a tube amp that dvoilera its full potential, for one with a Hiwatt Custom 50 is the (gold) top!

has been 10 years that I have, has bought 7,500 francs at the time, despite the worries of finish, I never revendrais!
is a model known but really not very attractive, especially as its rating is below Les Paul "traditional"
See the source
Did you find this review helpful?yesno
Cookies help us improve performance, enhance user experience and deliver our services. By using our services, you agree to our use of cookies. Find out more.