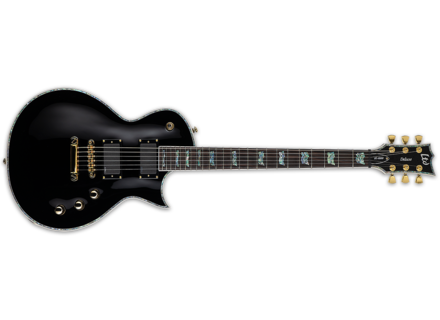 Buy this productView price information >
View other reviews for this product:
I got this off music 123, the left handed version, which cost $850 (about £500, which when considered is less than half the price of a right handed one in the u.k! worth a trip to the u.s just to save the money, plus its impossible to get a left handed one over here)

this thing is definetly worth the trip! originally, i was looking for something with a whammy bar, a strat or ibanez rg1570, but then i saw this thing and just had to get it, whammy or no whammy. its looks amazing, brilliant colour and finish, mines the red one, the bodies butifully contoured, like a les paul, but not as heavy, and i havent even mentioned the EMGs, which gives it amazing zakk wylde like tone, a Tonepros bridge, which keeps it perfectly in tune, or sperzel tuners, which make re-stringing so easy and takes no time at all. it also has 24 frets rather than 22, and a great fast neck.

the only improvements which would be nice would be if instead of two EMG81s, they put an 85 or 60 in to give more variation. i changed my bridge one to a 60, a much deeper tonal pickup when distorted, and gives the guitar a much better clean sound, which isnt too hot with the 81s. and due to the clever people at EMG no souldering is required. all you need to connect one conector to another. they could mabee change the inlays to just normal white, but im just nitpicking

qualitys top notch, mahogany body is solid as a rock. not easily dented like my epi SG, and set neck gives it a nice solid feel also

this thing is the shit! if you like your heavy tonal sound of the likes of zakk and dime ( riff in peace brother dime), this is for you. even if you dont you need to check this out, as there is a semour duncan option availible (right handers only i think?) the best next thing to a les paul and for less than half the price.