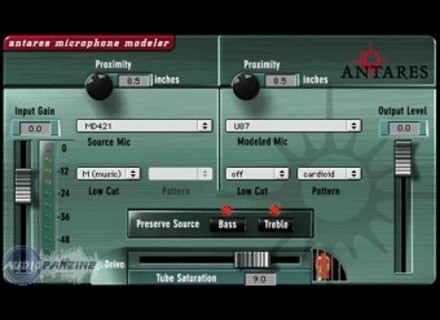 
7 user reviews
Find it in the classifieds starting at $25 Avg used price: $26

View other reviews for this product:
First off, I don't own this software; my extended family has a few connections in the industry, and I have a relative who is quite up to his neck in the big name plugins, so I have no idea how the software runs, or how easy it is to install. That being said, this is one of the most interesting pieces of software I've seen. Before I heard of it, I had wished for a program that made any signal source able to sound like it came from ANY microphone. Then I discovered this. WOW!

Anyone who has ever worked with a microphone keeping recording techniques in mind will find the mix modeler to be the simplest thing in the world. There is nothing but a menu for selecting the source microphone and the modeled microphone. And the list is endless, trust me; you'd have to be using a pretty darn obscure microphone to lose out with the mic modeler, and even then, they'll have sonically similar ones on the list. After that, there are the gain settings; there are also settings for tube saturation, as well as pattern-selection (when applicable) and pass-filters. One can even adjust his or her modeled proximity to the microphone!

Don't get me wrong. It's obviously not quite going to be like the real thing. It can't possibly replace every microphone. Do not buy this and an SM58 and expect to be set. I repeat: It's a program. It isn't essential to have at all, because all this plugin really does is automate frequency shifts, which you can probably do on your own anyway. Obviously, it's more complicated than that, but the only thing terribly revolutionary about the Mic Modeler is its concept.

A U47 sound will come from a U47, but if you are interested in experiencing new sounds without the tedium, this plugin may be for you!
Did you find this review helpful?yesno
Cookies help us improve performance, enhance user experience and deliver our services. By using our services, you agree to our use of cookies. Find out more.