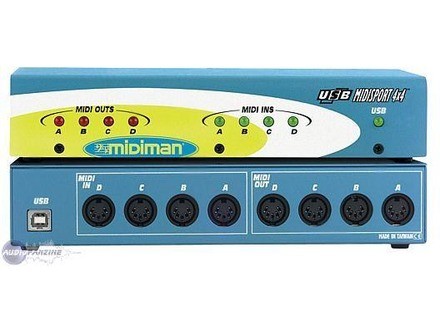 Midisport 4x4, MIDI Interface from M-Audio in the Midisport series.

View other reviews for this product:
No need to go over what has been said 100 times.

I use it on laptop, it feeds a whole bunch of stuff, among other interfaces Midi / CV for control of analog gear, a Motu 828 to drive another system, Novation, an analog midified.

Ultra stable. One branch, it works. Why is it not all the stuff like that?
Never update until now. Finally, as it turns, I did not ask.
Sysex going well. No drivers "DirectMusic" like other midiman, but it works well anyway.

I use it for the purchase

I went through the same channel in one, sleeping since, especially in the stew prodipe

One detail, however, and it only affects my usage a bit chaotic. It is unfortunate to have led on one side and the other connectors. Nothing too serious right?
See the source
Did you find this review helpful?yesno
Cookies help us improve performance, enhance user experience and deliver our services. By using our services, you agree to our use of cookies. Find out more.