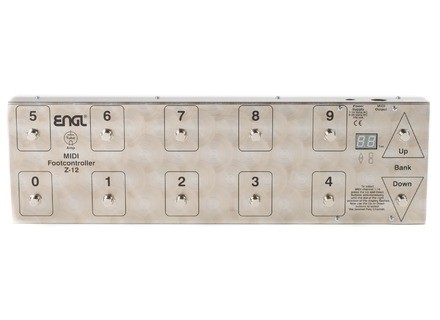 Value For Money : Poor
View other reviews for this product:
I use it for late June / early July, bought OCCAZ a very nice Afien! Used for a few rehearsals and two lives so far!

This is my first MIDI pedal, but not my first foot controller! Before Bossant on a Line 6 Spidervalve I used (and still uses flat on my Spiderjam) FBV Shortboard one.

This pedal is really great, beautiful, well finished, ultra strong and switches do not "click" when pressed not, it could destabilize the beginning but it's not bad! I was torn between this one and the Z9 normally suitable for my Engl E670 and the Z15 as it incorporated the effects loops in order to activate the foot. The Z15 is a bit off-budget and Z12 OCCAZ directly available I jumped on it!

We have access to 128 programmable presets (in 13 banks of 10 presets), which corresponds to the memory of my E670, but it's a bit much in one direction, I use in a pinch 6 presets really! I was able to overcome the lack of effects loop on the pedal to control the effects by simply setting my channels in 2 versions: one with one loop of the amp, one with the loop off, the fact that unless you really a different turn several times in a song, here it enables and disables the entire loop, you tap to play after precise effect

It is a bit imposing for a pedal amp, but I used the FBV (slightly larger) so not too worried, but it's a little Panzer for a pedal haha, even if it is relatively compact (50cm wide), at least it's solid !! The extras: slightly tilted for easy access to the switches at the top and is powered via the MIDI cable ghost when used on an Engl, ability to feed it with an external 9v power supply though! It is mounted 4 feet Heavy duty rubber, I removed to put Velcro to attach it to my pedalboard.

2 caveats:
- The cable outlet twelve o'clock is "backwards" ... if you have a MIDI cable right no problem, but I took an elbow to gain some space and make it more clean ... ben for once, I find myself with the cable that runs up rather than down, a little embarrassing ... it's better not to have a pedal just above the MIDI otherwise damage the cable or unplug it when you want to engage this hypothetical pedal.
- No LEDs at the switch to see where they are in the dark or see who is on (it always screen indicating which preset number is on but good), to locate itself in live situations, it can sometimes be a hit if you want to change the preset, but we made it (or add a loupiote pedalboard, watch the highlights, this pedal shines: p).

Level Q / P, I think it's great OCCAZ, for € 100 you end up with a pedal that will last for decades, it's a new bit expensive for what it is in my opinion (but that aligns with most pedals of this type).

With the experience I would probably choose it, or I would turn to the Z9 can be which is more suitable for my use since there are 10 programmable presets with configurable to activate certain settings (Depth Boost switches, effects loop, etc ...)! But who knows, maybe one day I would need 20 or 30 presets !! x)
See the source
Did you find this review helpful?yesno
Cookies help us improve performance, enhance user experience and deliver our services. By using our services, you agree to our use of cookies. Find out more.