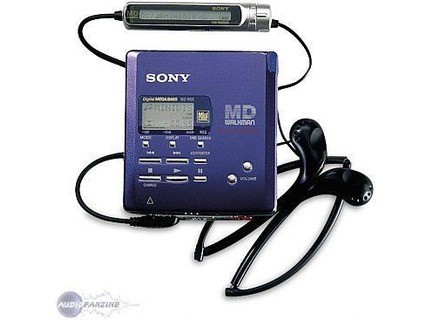 MZ-R55, MiniDisc Deck from Sony in the MZ series.

View other reviews for this product:
I've owned this mini disc player/recorder for about 4 years now and it really has been instrumental in my musical development.

Unfortunately the mini disc never really caught on, and now that things like the Ipod and Zoom H4 are out they're probably going to be pretty obsolete in just a short while (regular discs are becoming harder and harder to find and are most readily available used on ebay).

One thing this specific model doesn't have is a variable line in setting (or basically you can't mix the sound thats coming into the mini disc player), although it does have a 'mic sensitivity' SWITCH for either low or high sensitivity (pretty lame honestly).

Because they're falling quickly by the wayside, I wouldn't really recommend buying ANY mini disc player/recorder right now, unless you're really broke. They make a really great and handy field recorder and are great for bootlegging shows and such but there are just better things out there to do all of that with nowadays that you don't have to download onto your computer in real time (like the Zoom H4).
Did you find this review helpful?yesno
Cookies help us improve performance, enhance user experience and deliver our services. By using our services, you agree to our use of cookies. Find out more.