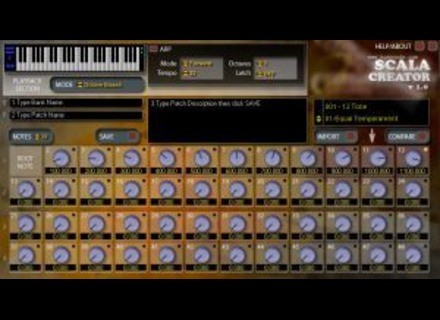 Although it is primarily designed as part of the Astralis pack to make patches for the Astralis synths, the produced .scl files can be used with any application that can load them. Scales can be up to 48 notes which should suit most purposes, and Scales can be created using cents via knobs or text entry boxes, which can also accept ratios. 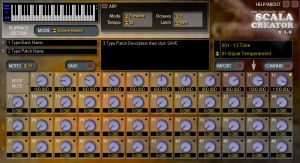 The VSTi is also equipped with a basic synth for playing the scales as you create them. The playback options are the same as those used in the other Homegrown synths, so that Scales can be laid out either back to back, or in Octave format, so that each cycle of the scale will always begin on a C key (Note that this is not saved as part of the scale, other synths may lay the Scales out differently).

Also included is an Arpeggiator with many modes, as well as a virtual keyboard which can use sticky notes, together this means that free hands Scale design is possible. You can select a series of notes and they will play continuously whilst you concentrate on creating the scale.

Scala Creator also comes with 300 Microtonal patches which come as standard with all other HG synths. This provides the file framework where the files are saved. It consists of a main folder which can be installed anywhere, and then sub folders within this location, appear as banks inside the HG VST instruments. This provides a simple way of organising patches. Inside the synth, this appears as two popup menus, the first selects the bank, and then from the second menu any patch within the bank can be selected. The currently selected scale can be imported to populate the working scale, and the compare button allows switching between these and the previous values.

The aim of Scala Creator was to make it a straight forward and intuitive process. It does not aim to compete with Scala, but provides an easier way for people to quickly make and export scales, and will be especially useful for those people new to Microtonal Tuning.

Scala Creator is free for existing owners of the Astralis Pack, and is priced at $22 for everyone else.