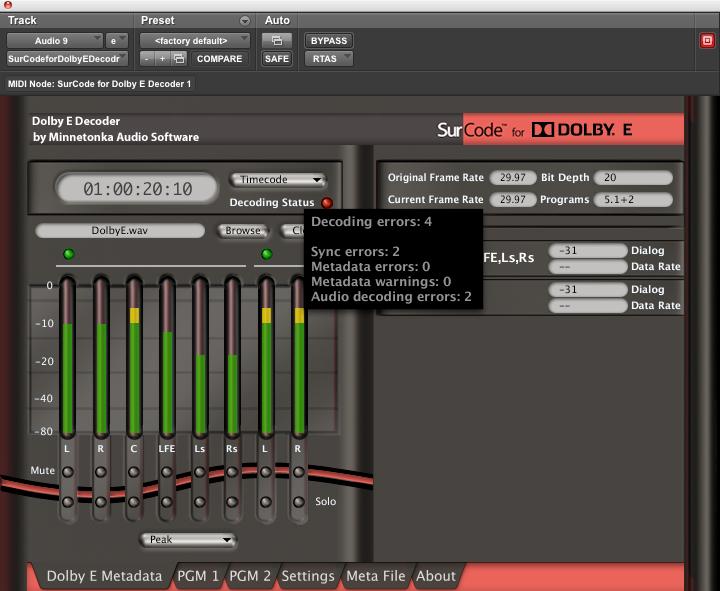 Other Effect Plug-in from Minnetonka .

Minnetonka announced that the company has released a new version of their SurCode for Dolby E family of encoding and decoding products.

SurCode for Dolby E provides integration of Dolby E elements into existing workflows on a variety of audio workstations. Linear PCM, with metadata support, can be encoded and decoded in real time and in the background.

Version 2.0 of SurCode for Dolby E is designed to bring a fivefold increase in encoding speed thanks, in part, to utilization of multi-threaded execution on all platforms. To further broaden RTAS, AudioSuite and VST support, a Final Cut Pro Export Decoder and AudioSuite Decoder has been added to the roster. The new Export Decoder for Apple's Final Cut Pro is designed to enable decoding to PCM without having to resort to external applications or processing loops. The decoder for AudioSuite is designed to compliment the existing real-time decoder and confidence monitor plug-in for Avid's RTAS. Both SurCode for Dolby E Encoder and Decoder now also support the recently released Pro Tools 10 and Apple's Mac OS 10.7 Lion.

SurCode for Dolby E 2.0 is a no-charge upgrade for existing customers. Individual encoder and decoder packages and components, along with the 2.0 SurCode for Dolby E Production Suite, are available now from select resellers or online at Minnetonka Audio Software. Licenses are cross-platform and bundle/suite licenses are modular, allowing them to be assigned to separate iLok USB Smart Keys according to the purchaser's deployment needs.

For information on SurCode for Dolby E and all of Minnetonka Audio's products, visit minnetonkaaudio.com.