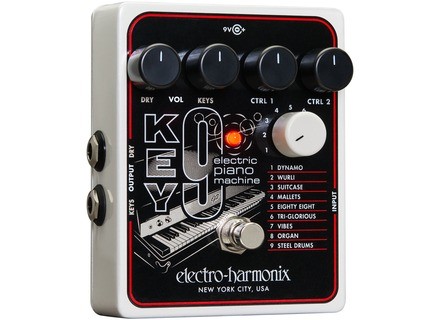 A review of the Electro-Harmonix Key9 Electric Piano Machine

Electro-Harmonix has followed its B9 and C9 Organ Machine pedals with the logical next step: the Key9 Electric-Piano Machine. This new stompbox uses the same technology as those organ pedals, and offers nine different emulations of electric keyboards and more.

The pedal is powered by an included 9V power supply.

In addition to the standard 1/4” input, the Key9 features two 1/4” outputs: Keys and Dry. The Dry output is for situations where you want to send the guitar signal to an amp or a DI and the mixed key/dry signal to a different destination. The output of both is monaural.

Like with other Electro-Harmonix pedals, the Key9 comes with a paper manual. While it looks like it was duplicated on the office copy machine, it does give you the essential info about the instruments emulated, playing style, the presets and more. Because the pedal has no digital memory, you can’t store presets, so EHX includes suggested settings for the various instruments, expressed in the form of a knob diagram. The manual also offers a blank diagram template for you to write down your own settings, and a link is provided for downloading of a PDF of blank setting sheets. Other than the PDF part, it’s all pretty old school, but it works.

The manual also explains that the Key9 should be first in your signal chain, right after your guitar, and before your other pedals, especially distortion pedals. What’s more, it’s recommended that you use your guitar’s bridge pickup to get the best response.

Like the B9, the Key9 uses internal synth processing to transform the incoming signal into a replica of the instrument being emulated. Electro-Harmonix doesn’t offer a lot of detail regarding how it works, but the results are mainly impressive. What’s more, the tracking is more accurate than on a typical guitar synth. It’s not as good as the Boss SY-300 (see our recent review), but is pretty close. Like with the B9, I did experience some latency when using the Key9, more on some sounds than others, but that aside, my articulations were pretty closely replicated on most of the sounds.

One sound, Mallets, did not follow my playing particularly well. I found I got some strange sounds when bending it. It sounded like a MIDI guitar when you don’t turn the pitch bend on, and instead you hear it the notes within in the bend sounding chromatically one after another, making it anything but smooth. Then again, virtually all the instruments emulated on the Key9 are played with keys or mallets, meaning there isn’t any pitch bending anyway, so maybe that’s not a huge deal.

Here's an example of what bending sounds like with the Mallet sound.

With the exception of Wurli, all the electric piano sounds (Dynamo, Suitcase, and Eighty-Eight) all have a Bass control that lets you add a lower octave to the sound. I assume this is to simulate a keyboardist’s left hand playing bass notes. You can dial in as much or as little of it as you like.

You get much better results when playing the Key9 with parts that are played in the style of the instrument being emulated. For instance on the electric pianos, playing long sustained chords sounds, finger style, yields more realistic results. As a whole, I had better luck with finger-style playing for the electric piano sounds. It just felt more accurate.

I found most of the time that I liked keeping the Dry knob turned down. To me, the emulations worked better without the guitar sound in them.

Now, I’ll go through the sounds and offer examples and observations. Some of the audio examples were recorded direct, some on a miked Fender Twin, and some through a Roland Cube 80 amp's direct output. I used a Fender Telecaster when recording the examples, except the steel drum example, which was done with a Strat. I also added reverb to most of the sounds, and I had to compress a couple of them because their dynamics were widely varied.

Dynamo offers a nice Rhodes emulation, complete with the sound of the tines. You can use the Control 2 knob to dial in more or less of the Tines.

Wurli gives you a hard edged sound and, if you play pianistically, sounds pretty convincing. In this example, two parts are playing. The Wurli sound was used for the chords and Suitcase for the lead.

Suitcase is also Rhodes-like and has a phaser to give it motion, as well as an adjustable phase shifter. Here's a slower example featuring the Suitcase sound. This one was recorded direct.

Mallets, as mentioned earlier, are the least comfortable to play, as you'll hear in this example.

Eighty-Eight is also Rhodes-like, but with a little less bottom end than Suitcase. It has a tremolo effect on it that you can adjust with the Control 2 knob.

Tri-Glorious is a chorus effect, an emulation of the Dytronics CS-5, a chorus unit that was originally made for Rhodes pianos, but later released as a standalone effect. You hear more of your guitar in this sound, and the chorus is nice and shimmery.

The Vibes setting gives you a good vibes "vibe," if you'll pardon my pun, although doesn’t nail the sound 100%. You can adjust the attack and the tremolo speed.

Organ: Not my favorite of the of Key9 sounds, it lacks sustain and and either sounds too tinny or too round, depending on where you set the tone control.

The Steel Drums sound is a little clunky to play cleanly, but the sounds is pretty darn good.

Here's an example where I played two steel drum parts.

The  Key9 ($221.30 [I'm not sure why the 30 cents is on that price, but that's what everyone seems to sell it for]) is a worthy successor to the B9 and C9, and is actually more versatile because it offers a wider variety of instrument sounds. The tracking is generally very good, although some sounds work better than others. Even at its worst, the latency is not enough to throw you off your game, though you do notice that it’s there.

The sounds are mostly good, especially the electric pianos and the steel drums. If you’re using the Key9 on for live playing, it will your sonic palette pretty significantly. In the studio, it can definitely be useful as well, if you need to get the flavor of one of the emulated instruments into a recording.The fact that you can’t save and recall presets isn’t a huge deal for onstage use, because there are only a couple of parameters for each sound, so quickly dialing in the right settings (presuming you know what they are) is easy.

Overall, the Key9 Electric Piano Machine is another creative and useful pedal from Electro-Harmonix.