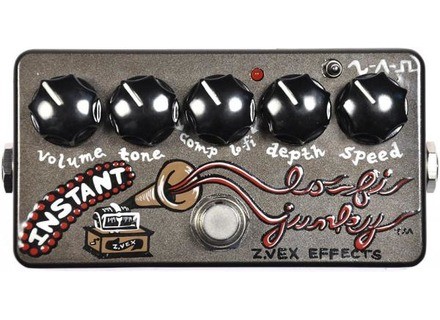 The Instant Lo-Fi Junky is a brand new product from Zvex. It was designed to mimic the neat tones achieved by the Lo-Fi Loop Junky, an analog loop pedal also made by the company. Players loved the sound that they got from the Loop Junky, and wanted something that could get that tone in real-time.

The Instant Junky has 5 knobs (vol, tone, "comp/lo-fi", depth, and speed) as well as a switch to control the waveform. The volume control can get a good level of clean gain boost out of it, so it is already a valuable addition to a pedalboard with just that.

The comp/lo-fi knob is where this box shines. It acts as a blend between a compressor sound and a vibrato circuit. With the control all the way in comp, this pedal sounds like an old MXR Dyna Comp or similar. It can get really squished, and is fantastic for clean tone Telecaster chicken pickin'.

When that control is turned up a little, it engages the lo-fi circuit, which turns on the tone, depth, speed, and waveform controls. The sounds in the extreme end of this are very watery, shimmery, and just dripping with the cool factor. Playing around with the depth, speed, and waveform controls can achieve anything from nice chorus washes to near-Univibe churning. It won't pass for "Machine Gun" to most discriminating ears, but it would work in a pinch at a gig where someone requested some Hendrix or Trower and a Univibe pedal wasn't handy.

My favorite thing about this pedal was turning the comp/lo-fi knob to about 70% compressor, 30% lo-fi, and making the lo-fi very subtle, but turning the tone knob way down. I don't really personally want to emulate an old record player (as the hand drawn artwork on the box suggests), so I use this box to be a compressor/boost pedal with a touch of chorus. It is very inspiring on the clean tones, with a bit of delay and reverb added, and I could play on that tone all day.

This is a great pedal from Zvex, and would make a handy addition to any arsenal.