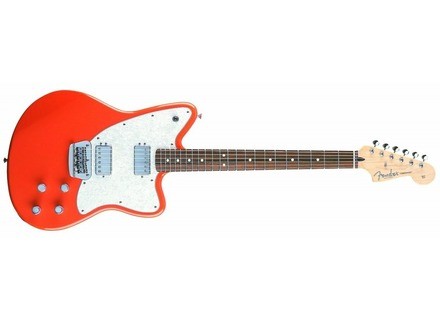 Deluxe Toronado, Other Shape Guitar from Fender in the Toronado series.

View other reviews for this product:
I bought this guitar at Sam Ash (before I discovered Guitar Center), for about $525. What a purdy one she is!

It stays in tune pretty well as well.The Toronado looks amazing. I bought it in orange, and it definitely stands out. This guitar is very easy to play and I love it to death. It plays very well and I wouldn't dare sell it for a long long time. It's the best built mexican Fender out there in my opinion because it plays better than any other mexi tele or strat that I've played, and it also looks prettier. It stays in tune pretty well also.

About a year after owning it, a volume knob fell off, but it's nothing that some super glue and careful placement can't fix. I made the mistake of pressing real hard on it after I glued it back on and it sort of grinds against the body of the guitar, but it's not noticable when performing. There is a surprising amount of feedback from this guitar, and it messes with me when i play shows, but it's nothing a few seymour duncans can't fix! I'd highly recommend replacing the atomic humbuckers with seymours.

Very solid. It's built very well and after 2 years of owning it, the only things that have come loose are the volume knobs. The guitarist of Brandtson plays a red toronado, so that proves that it has good enough quality for even touring bands.

Good stuff! I'd recommend this guitar for anyone from intermediate to pro. I love it so much and it's treated me well throughout all the shows i've played despite the feedback issue. But again, if you replace them with some seymour duncan pickups, then you'll be set. I would rate it a 5 if it wasn't for that little problem. GREAT BUY!