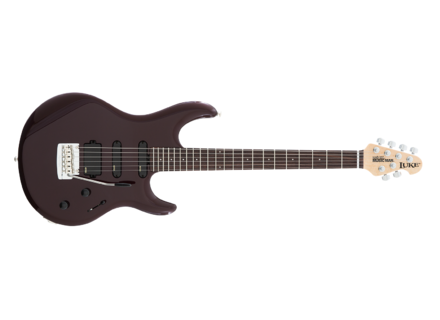 Luke (Vintage Tremolo), Other Shape Guitar from Music Man in the Luke series.

View other reviews for this product:
Guitar manufactures active in the United States, San Louis Obispo, California, guitarist Steve Lukather signature of the group Toto (among others ....), has 22 frets, two single coil EMG EMG humbucker SLV20 and 85 to levels of vibrato.
The vibrato in fact, is a MusicMan vintage or Floyd, or simple, if we play on his rglage, an incredible precision, the more you play, the more prcis, which is nice, it ' is to 'tap' on the extrmit vibrato, tremolo for a hell ....
A slecteur 5 positions to move from one micro to another or to mix ', also quite steep, it is because we quickly change unwanted nuisance when playing, and a SETTING THE SETTING THE volume and Tone for ensemeble microphones.
The handle, with a form particulire trs, which can be awkward at beginners, but they quickly take trs trs in hand (no pun intended)

Let's talk about race. Ernie Ball on the site was The definition follows, deep V, in fact, the back of the handle is lgrement V-shaped, which makes the handle dplacement trs simple and we also have a good performance of the agreements, without forcing the left hand. The back of the neck is not painted, and is an incredible rapidity, the more one feels trs soon ease, and it is a pleasure to play vritable on this guitar, even no amp, just like a.
The part that allows the attachment of the handle on the body is hollow, which allows great ease your checks to the high notes.
The ergonomics are excellent, and it's mostly light weight for a guitar of this type. Just 3kg!
To get a good sound? You just plug it into an amp and play youth

It should all types of music, rock, funk, blues, hard rock, grunge same, jazz .....
I play on a Marshall combo VS100R, but I can not wait to try it on an amp Fully lamp, and the effect, come see my bio, it will be easier ..... lol
For sounds clear, simple privilgiez mics, they are more enjoyable, even if the 85 is perfect, there are more sounds with SLV20. For example, the neck pickup, just play on the Tone to pass a stratum ', has a Les Paul, in terms of roundness. For rhythmic funky, make a mix with both SLV20, playing on the Tone lgrement, everything should be fine issue with this guitar.
For sound fatter, you may as well stay on SLV20, for example rhythm, but for a solo, the prfrez EMG85, which has more sustain, but to play the hendrix, the level SLV20 the handle, plain as saturated is a wonder !!!!!
Freedom for example, or even purple haze, a place as a letter in the mail!!
I love all the sounds of this guitar, nothing is thrown, nothing!

I use it for 4 months, and I play it so I spend two sets of strings !!!!!, a month instead of two per quarter !!!!!
I love the sound, the look (I've finished now found new order, blue dawn, a sunburst of blue mat terrible !!!!), the least we can find one would be the price, 2400 average for the nine, but, but, but, dj has worth, but not see n'histez The models used, I do, in gn ral guitarists who have bought this guitar are trs trs careful, and you get an excellent guitar for a reasonable taken (1500, purchased in Australia on the internet for my case, port frait and tax included)
I have tried many guitars, SRV, Clapton, Les Pauls, but I j'tais dj on the Achteras one day, do not hsiter.
The report price is quality even when consquent, we can not say otherwise, but it is a high-end guitar trs low to medium SERIES, made with special care at the finish, so the price is honnte.
I would do this choice, with the same conviction that I have now.
See the source
Did you find this review helpful?yesno
Cookies help us improve performance, enhance user experience and deliver our services. By using our services, you agree to our use of cookies. Find out more.