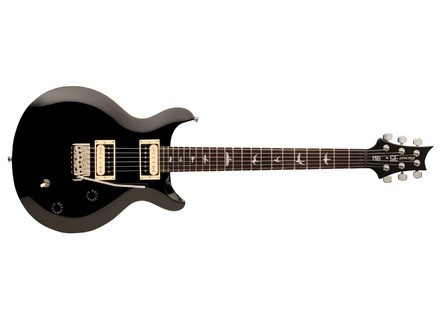 SE Santana - Black, Other Shape Guitar from PRS in the SE Signature series.

View other reviews for this product:
It says in the notice dja Previous, I do not see what I could add.

Oh yes, the cover is supplied with!

Pretty easy to use, one volume knob, 1 Tone 1 3 position selector, there's more complicated as use. Apart from the selector knob up derrire Tone can be a bit far.

A good place for lgret and natural position taken by the guitar, well balance.

Uh .... I would say the bof. The micro acute lack of personality and bright and then also winning, I'll also change it. The microphone must be serious trs well for clean sounds, I used only for ca elsewhere.
A bad point for the micro acute, not happy

Since I have a Bill Lawrence L500 mountain top and I have my paufin rglages, it's going much better! I ride a 7 note because I'm in a good mood and what not sound so bad.

I do not think I would do this choice, for her, otherwise I like the color and shape. In addition to mine the volume knob a squeaky, guitar control by PRS?? I have a doubt ...., surtoutq hether a continuous crack APRS change, finally, the sav that merdouille. I'm on the wrong tomb SERIES of knobs.

For the next three times I would take my time to choose!

In fact it is not bad, but thinking has to change the micro acute if you want to do more than rock!

I think I love him well in the end ... I would put samples of my stuff the day I realized how Tracktion!

Against it by a hair remains CHRE ...
See the source
Did you find this review helpful?yesno
Cookies help us improve performance, enhance user experience and deliver our services. By using our services, you agree to our use of cookies. Find out more.