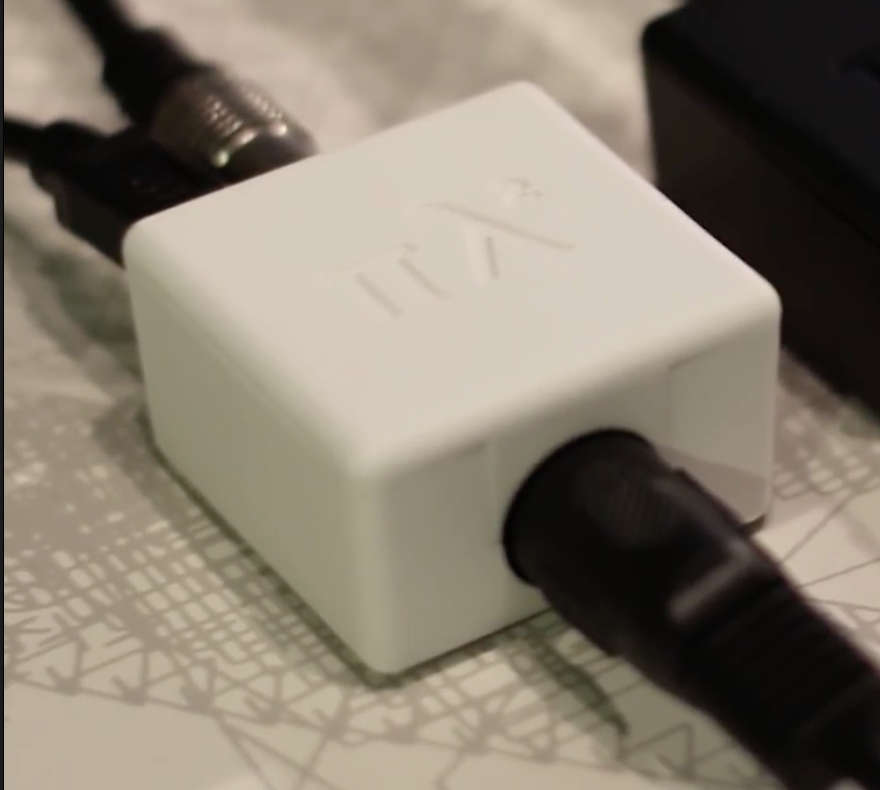 The Ploytec Pi L Squared Leukos (PL2 Leukos) is a hardware synthesizer module that fits in the palm of your hand, and can plug into your computer and respond to your DAW. Its analog pulse wave oscillators and analog and digital filters can create some pretty impressive synth textures. All parameters are edited via MIDI control change messages or using the comprehensive free software editor. And best of all the PL2 Leukos sells for a street price of $99.

The PL2 Leukos is the second of two mini synths released by Ploytec, the first being the Pi L Squared. Sonically, it’s the same as it’s older brother, but the PL2 Leukos, which is in a white case rather than the black case of the PL2, is designed to connect directly to a computer, whereas the original model is made to connect to the MIDI out of a MIDI controller. Both have the same architecture and sound set.

Like the PL2, the PL2 Leukos has a MIDI jack, but whereas the former features a MIDI In through which it draws its power, the latter sports a MIDI out (designed to connect with an original PL2 to double the number of voices from two to four) and is powered by the USB bus from your computer. You can also use it with an iPad, by connecting it through the Apple Lightning to USB Camera Adapter (or Camera Connection Kit for 30-pin iPads).

As you might imagine with such a tiny unit, the PL2 Leukos is simplicity itself when it comes to I/O. A mini USB port lets you connect to your computer (a short Mini USB cable is included) and a mono RCA port offers a line out for connecting to your audio interface.

The PL2 Leukos has no controls on it, all changes are made via MIDI controller data. You don’t need to be a MIDI whiz to use it however, as the free editor software available on the Ploytec site (it works for both PL2 models) makes it easy. Before discussing the editor in detail, let’s take a closer look at the PL2 Leukos’s synth engine

The PL2 Leukos uses a synthesis method that Ploytec calls “Square Wave Synthesis, ” which is based around a pair of analog pulse wave oscillators whose waveforms first pass through a digital filter and then an analog one. So it’s an analog/digital hybrid of sorts, but not of the typical wavetable-based variety. Its synthesis is of the subtractive type, as the waves are altered as they pass through the filters.

Here’s an example of an analog-like tone from it:

The PL2 Leukos is a duophonic synth, meaning its maximum polyphony is two. Obviously, with only two voices, you won’t be using it for playing chords, it’s more of a lead, bass or special effects kind of instrument. It comes with 64 internal memories, the first 32 of which are factory presets that can’t be erased. The second set of 32 repeat the factory sounds, but can be edited and saved.

Here’s an example of a bass sound.

The free editor application, which is available for Mac and Windows (I used version 1.32 on the Mac), is simple to install. From it you can edit all the synth’s parameters, which include ADSR Envelope, Digital Filter Type (Low Pass, Band Pass, High Pass), and Analog (filter) Cutoff and many others.

You can choose between four different oscillator modes, Mono, Poly, Dual and Octave, and the oscillators can be adjusted with the PWM sliders. In modes other than mono, the Note Priority parameter lets you choose whether the highest or lowest note will be prioritized if you play more than two notes simultaneously. The Filter DC Offset slider dials in a Bitshifter effect that produces lo-fi, aliasing distortion.

In this example, the Bitshifter is off at the beginning and then gradually added.

Although you only see four choices (Waveforms 1, 2, 3, and 4) when you open the Waveform pull down menu, changing the Control #3 Mode to Second Mode, you get several other choices including Bassdrum mode, which gives you a bass-drum-like sound up to MIDI note F3 and a percussive white-noise-like tone above it. Although it won’t make you forget your favorite virtual drum instrument, it’s cool sounding and can be used to create simple percussion parts.

The four waveforms you get with the control mode set to Normal include two square waves with the same pitch, two an octave apart, and two complex square waves.

The editor also allows you to assign mod wheel parameters, turn on and off portamento, and, of course, change sounds. It has an onscreen keyboard for testing out sounds that features built-in sequences you can play while auditioning patches.

Overall, the editor is well designed and easy to use, and even if you’re not experienced at synth programming, it makes it pretty easy to experiment with the PL 2’s parameters, and create your own sounds.

One of the cooler things about both PL2 synths is that the editor has a Firmware/Mode menu that lets you switch between different firmware versions with different sounds. The default is version 2.0, which has the standard sound set. But if you switch to PL02.56, you get what Ploytec describes as “tribute firmware, ” which honors the General Instruments SP0256-AL2 speech synthesizer chip from the 1980’s. Giving you a “speak and spell” like sound. There are less editable parameters with this sound set, and fewer sounds available when you switch to this Firmware, but you still have a fair amount of editing control. Expect Ploytec to release more firmware sets in the future to further extend the sound collection for the PL2 platform.

Switching between firmware versions takes less than 10 seconds and you can go freely back and forth. Most of the time this was easy using the editor, but a couple of times it appeared to have switched versions, but when I went to play the synth, I discovered it hadn’t actually switched, and I had to do it again.

The PL2 Leukos (and the PL2, since they both have the same sounds) is a little hard to categorize sonically. On some sounds it’s reminiscent of an analog synth, and it can also give you a kind of retro, lo-fi sound, especially when you add its digital-aliasing distortion.

The synth certainly doesn’t have a particularly wide sound set, or any ambience or modulation effects, but for what it can do, it’s impressive. Plus, you get the alternate Firmware

Here’s an example put together using only sounds from the synth. Since the PL2 Leukos is not multitimbral, I recorded one track at a time as audio in Logic Pro X, and then mixed them. I only adjusted volume and pan, and didn’t add any external effects. Note that one of the sounds at the very end comes from the voice synthesis sound set available in Firmware PL02.56.

The PL2 Luekos ($99) has some limitations, but when you consider that it’s a pocket-sized hardware synth that can easily be added to your DAW setup, it’s quite impressive. It’s also a great way to get into synth programming, because it’s relatively simple in architecture and the editor software is a breeze to use.

Presumably because of its size, it’s somewhat stripped down feature wise and has no effects, but you can easily add additional processing to the sound via plug-ins once it gets into your DAW.

So whether you’re connecting the PL2 Leukos to your computer or iPad, it provides more synth power per square inch than you’ll find anywhere.