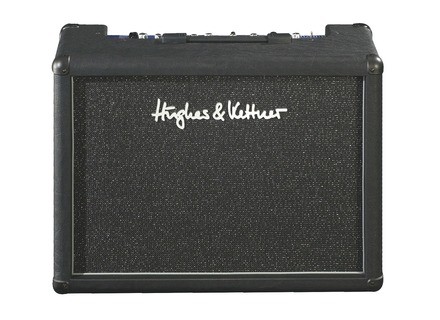 View other reviews for this product:
This type of amp you stay with the transistor to be honest its not issue a hyper powerful sound on some amps like the JCM2000 which for me is not that great
In terms of power is a 2 * 60 watts with a junior driver Hp rock and a vintage 30 (celestion 12 'for 2)
Can connect the device to a computer via plug in and out stagebord to register effects loop headphone jack.
Mesa boogie triple the simulations corrected satisfy fans of big well hard and the Warp marshall rate can be expected as the best simulation JCM2000 is pale even if a version is available on the distortion amp the Marshall Plexi 100 and 50 are also a little below what one would expect, the fender amp cons are totally successful with the simulation of the tweed Bassman and 4 * 10 and a tweed Deluxe amp Roland clean perfect for jazz, there are two simulation Vox AC30 cruch.On expected to clean and the Brian May is nothing he did rather a kind of pale copy.
level effects found Chorus Flanger Phaser Tremolo the model (in stereo) and a compressor bypass self wha wah 2 (quite successful) and a fuzz quite nice if you want to add aipaisseur son.Il is also the presence of 16 delays (ping pong, space delay, tape delay, loop-o-tap). If you want an amp for modeling studio is a great product for the very professional and hard blues. If one wants more Polivalente worth your Zenter model (which for me is the ZenAmp) but it is much more expensive

Configuration is very simple even children's
If one spends time there may be "about" the sound that is his desire to go to AC / DC through Slayer or more of the blues (Jimi Hendrix fans of this amp is for you) the Fender amp is very well modeled, perhaps the main strength of this amp
Again the manual is very rough person who made the 28 BAC will it get by very well for others it will feel just has all the buttons

I play all styles of music rather to jazz blues with a heavy chouillat
I use a Jackson Randy Rhoads equip Seymour Duncan pickups and j'obtient of its very close to what I hear on the record that I listen
If we want a big Pantera its type is not necessarily being obvious to the abscence of Randall amp but the amp against mes / boogie triple rectifier is ideal for large, metallic blues man will also find their account with Fender amps and can be a marshall Plexi100
My favorite is the modeling of the Roland clean with a slow tape delay and a fuzz effect of pushing o max and if not a Fender Tweed Deluxe amp with a stereo chorus and a delay is reached fast enough to approach the sound of pink floyd on the album "Dark Side of the Moon" and finally sound funny but not very playable with a fender tremolo bassamn grow to 3 quarts

I use it for 6 months is a good investment for the budget moyens.La feature of this is its great apli Polivalente on all styles, but for those who would Indesca I would advise buying a ather Valvtronix of 120watts
See the source
Did you find this review helpful?yesno
Cookies help us improve performance, enhance user experience and deliver our services. By using our services, you agree to our use of cookies. Find out more.