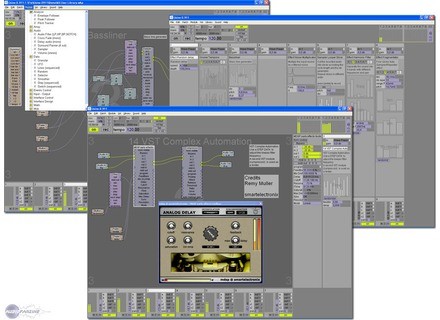 View other reviews for this product:
Installation? It's simple: it is the easiest thing to install I've ever seen! You download a compressed file, decompresses it, and Ouali! The idea is that plant can be installed on a USB stick or other portable device, and can therefore be used on any bike like it was our personal workstation.
Configuration very easy to do: choose the audio interface, you set two or three things (record files of audio file vst, MIDI) and it's over.
The manual is particularly clear, educational, rigorous and extremely organized. The bad thing is it is still and always in English. And the complexity of certain concepts and certain situations (but not due to plant certain uses) is sometimes a handicap. Fortunately, the site's forum is here (in English again, grrrr) and especially the author which can be contacted directly by mail!

I tried it on a Pentium 4 with XP and Ozonic and 1gig of RAM.
The only bugs I encountered were due to new features that came out and that had not been run by users on many machines. Of releases came out quickly to make adjustments.
Performance depends only on your machine. In addition to plant constantly adapting to latest technology (it was among the first software to manage the dual core, Vista, 64bit, etc). On my bike, I loaded with many factory VST everywhere, so it rowed a little, but my stuff is not the first youth ...
But other than that it is particularly stable

I first used the free version, but the author was once quietly removing features, which forced me to buy the pro version. Well, that's fair enough, I still began to use it in concert. Presently I saw my needs down and I have another configuration. I just let this software until the next version vst so, and there I was delighted as it gave me the tracks reopened unexplored!
What I like most is his omnipotence. To my knowledge, the only software that allows to go as far and as directly (and therefore by that I zap all that is Max, which calls for reinventing the wheel each time). We can connect everything with everything, make the computer a real musical partner, or be confined to functions very simple vst host. There is a playful side that appears as soon as we embarked on the construction of a new system and that's very exciting.
Things that I dislike? Besides the interface is damn confusing at first, but it is after a time, some things still lack flexibility found in soft drinks major brands. But it is still anecdotal (like saving a trick with a new name, which can not remove the old via software, but only through windows, provided to close plant otherwise not refresh its record of stuff like that ...)
The value for money is exceptional, especially with the free vst version is dynamite Treats! And 50 euros is not death if you want to afford the pro version!
With experience, if I again need the pro version, well yeah not hesitate!
See the source
Did you find this review helpful?yesno
Cookies help us improve performance, enhance user experience and deliver our services. By using our services, you agree to our use of cookies. Find out more.