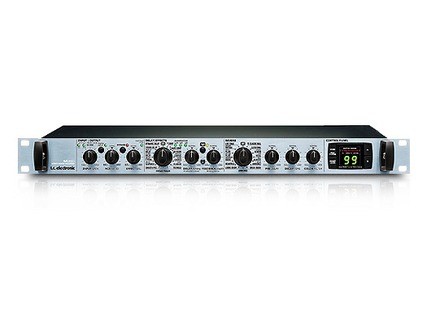 These effects engines are obviously 100% digital. Although the number of parameters is rather small (this is not a M3000 !!!), the essence is there. Not to mention real programming, one can very quickly coloring effect the taste according to his needs.

It has analog connections (6'35 jacks) and digital (SPDIF RCA).
It also has MIDI to control it from a master keyboard or sequencer .... Practice.

The two processing engines can be placed either in series (effect - reverb) or in parallel via a small switch (unfortunately placed at the rear of the rack).
Memory, the manual is rather succinct. Even if the edition is rather simple and intuitive, I find that managing presets lack of fluidity ... The move from 'real time' to 'preset' is not necessarily a logic high at first. But once that little gray area treated, you're set ...

Effects are, to my taste, quality. Well, I repeat, not a M3000!
But every time, has always served its purpose: reverb on voices (plugged into an external effect in Cubase), as an insert effect on synthesizers (phaser + reverb with a short ping pong delay added by Alesis MidiVerb4 and it is in the box) ...
Personally, besides the reverb which logically are very clean, I particularly like the phaser that are simply musical. On my CS15, a good Phaser placed after a stereo delay is in any lead!

I have other effects (MidiVerb4 Alesis, Digitech S100), I have used other in mates (Lexicon MPX-1, TC FireworX, ...) and finally he always finds a place in a production ...

As mentioned earlier, I'm not a fan of fashion 'preset' but that is just ...

I think the price / quality ratio is excellent. I do not regret my purchase and I would do without hesitation ...
See the source
Did you find this review helpful?yesno
Cookies help us improve performance, enhance user experience and deliver our services. By using our services, you agree to our use of cookies. Find out more.