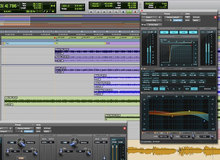 Are Amp Sims for You? Before Deciding, Check Out These Tips

Guitar amp simulators are controversial. Some say they don’t sound or feel like real tube amps. Others say sims deliver sounds you can’t get any other way. Guess what? They’re both right.

10 Things You Need to Know About Amp Sims

Latency is becoming a non-issue.
If you got turned off to sims because of latency—the delay between hitting a note and hearing it—take another listen. With today’s fast computers, the delay can be well under 10ms. In practical terms, that’s the same delay as having your ears 10 feet away from your amp. Peavey’s ReValver MkIII even offers two modes, one for minimum latency while playing, the other for maximum fidelity during playback.

Peavey’s ReValver MkIII has a “Real-time” mode for minimum latency, and a “mixdown” mode for maximum fidelity.

Sims do re-amping for free.
When you load a sim into software like Pro Tools, Sonar, Live, etc., you’re not recording the processed sound: You’re recording the dry sound of the guitar, and monitoring through the sim while playing back or recording. So, you can change your guitar’s sound right up to the final mixdown by changing the sim’s settings.

You must tweak the presets.
When I first try out a sim, I always think it sounds terrible—until I tweak the presets to match my playing style with my guitar. If a preset was created by someone using a single coil and light gauge strings and you’re using a humbucker with heavy gauge strings, it won’t sound as intended.

If possible (especially in stand-alone mode), run the sim at 88.2kHz or 96kHz.
While I think 44.1kHz is fine for listening to CDs, running a sim at a higher sample rate allows it to reproduce distortion characteristics with better fidelity. Try it; I bet you’ll hear a difference.

Many sims have “high resolution” options—use them.
Recognizing that sims suck a lot of juice from computers, programs like IK AmpliTube and Native Instruments’ Guitar Rig have options that provide higher fidelity, but increase the load on your computer. Use these unless they load down your computer so much the audio starts to glitch.

IK’s AmpliTube has three oversampling options and a high resolution option—if your computer can handle the load, check them all for the best fidelity.

Download any available updates.
As computers have become more powerful, designers have tweaked their simulation algorithms to take advantage of the extra power. The result: Better effects, and a sweeter sound. Today’s sims sound way better than ones from even just a few years ago.

Sims are not an “all or nothing” proposition.
Miss the sound of speakers in a cabinet pumping air? Then bypass the sim’s cabinet, and feed the sim preamp output  into your physical amp. Conversely, if you love your pedalboard but hate carrying around amps and cabinets, plug the pedalboard output into the sim input, use only the sim amp and cab, then plug the sim output into a mixer or PA system.

Want to use a physical cabinet and speakers? In Waves’ GTR, bypass the emulated cabinet, and send the output to a guitar amp.

Watch levels like a hawk.
Make sure your sims never go “into the red.” This creates nasty digital distortion that is totally unlike the “good” distortion you get from a tasty preamp or amp. Guitar Rig even has a “learn” function (as do other sims): Play your very loudest, and Guitar Rig will adjust levels automatically.

Amp sims are not just for guitars.
A typical amp sim program includes a bunch of effects—chorusing, delay, pitch shifting, reverb, and more. I’ve used sims with great results on vocals, drums, and keyboards. In fact, amp sims were the "secret ingredient" in my Turbulent Filth Monsters sample library of twisted drum sounds.

Sorry, but there’s no “best” sim.
The algorithms that create amp sounds are as much art as science. Just as I have several guitars, I have several amp sims because each has its own character: Some might excel at clean tones, others at distortion, and still others might have great but not-so-hot amps. Sometimes I even put two amp sims in series so I can use the preamp and effects from one sim and the amp and cabinet from another.

Sims are definitely not as “plug and play” as standard amps, which have far fewer options. But dig deep enough and learn to tweak: You’ll get some mind-blowing sounds that are impossible to achieve any other way.