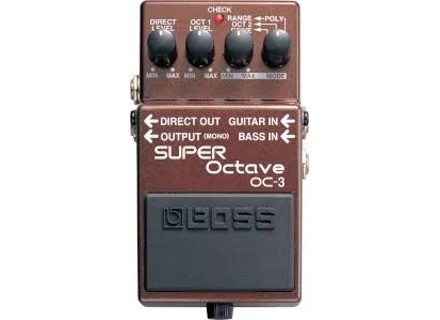 Buy this productView price information >
View other reviews for this product:
Boss has a newer octave pedal called the Boss Oc-3. This is the newest in the line of Boos octave pedals. This one is the replacement for the Boss OC-2. This one can take an input for bass and guitar which is a nice feature since the bass generally uses an octave pedal more frequently. It also has three modes consisting of drive, poly, and oct2. The drive adds distortion to the mix. The poly is great for octaves using chords. and the oct2 is the same as the Boss OC-2 which has two octaves at the same time.

I like the drive feature to this pedal. It gets a little more dirty in the mix and gives it the right amount of extra push to take the octave effect to the next level. The octave two is nice if you already know what the sound of the Boss OC-2 and which incorporates the two octaves sounds and is very great for certain sounds in songs. The poly is nice for chords and great for someone who plays a lot of power chords and strumming type settings. This will give you a great sound for a strumming type player.

The two options for having a bass guitar input and also a regular guitar input is a nice one. This will be a pedal that ca transcend not only one type of instrument but two types. It makes it effective for some bands that would like to use the pedal and doesn't know where to fit it in the mix.

At new these pedals come in right at around $85, which is a great price for a very cool pedal. This pedal ca produce some very cool sounds and effects when used in sparing. I would recommend this pedal to someone who loves effects and could use an octave pedals sound. This is pretty cheap unit and does the job right.