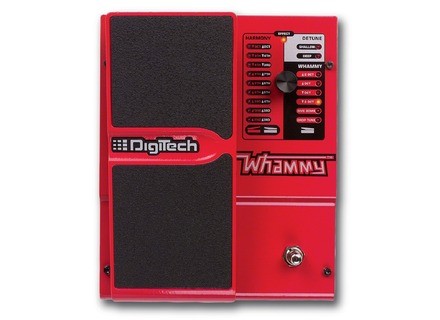 Value For Money : Excellent
View other reviews for this product:
- What are the effects or types of effects available?
It is a PDAL octave / harmonizer (gift features chorus and flanger).

- Are they ditables? Via an editor Mac / PC?
Not ditable (well I do not see what could edit on a octave / harmonizer).

- What is the connection? (Audio / MIDI)
As in:
AFTERNOON.
Jack.

- Is this a rack or rack MODEL?
It can be placed in the loop (this is what I do) or before pramp. I pramp test before and I must admit not to have felt as his diffrence is that for a given I in my loop (can be a little diffrence in heavy distortion).

- Your score on this?
On paper: PDAL octave / harmonizer, CONTRL possibility of easily thanks to MIDI, for 200 it was worth the money (it is on that is far from an Eventide but price is far too).
10/10, blameless on this issue technically.

- The configuration gnrale Is it easy?
The plug & play in his art: it engages you select the effect and go.

- The edition of sounds and effects is it easy?
No edition of possible sounds so it is quiet for a.

- The manual is clear and sufficient? ...
The manual (Fran and English) perfectly explains everything you need to know about the pedals.

- Your score on this?
PDAL plug and play, nothing more effective and easier to use.
10/10 criticized because nothing on this point too.

- Effects are they effective, suitable and adequate ralistes?
You get what you ask, for example: you go to an octave, it triggers the effect, we put the pedals all the way forward, the report notes an octave is found suprieur. Kapichira?.
In terms of adaptation, I&#39;d say it&#39;s all about parsimony: the whammy without stopping, so nothing to kill music, and instead use trsslect surprise effect and above all give the audience a lment REALLY interesting in your song.
In terms of ism is a bit more complex. The pedals of the big problems is the effect "Nintendo" on your guitar sound: once the power button of the effect we find ourselves engaged in the years to sounds 8 ~ 16 bits . If you use many effects, one can make a smooth move, but if you tend trainer a little too hard and it means a specially. I guess Nintendo-core gamers apprcierons, the players will do with standard, and a home-studio owners prfrerons Eventide.

- Which instruments do you use?
My amp is a Mesa / Boogie DC-3, my guitars are a RX100 changes in lead guitar, a JV200 (not change ) And a Jazzmaster 62 &#39;GAVI. For the rack just my Bulldog to keep him company, and I have my Boss tuner just before the pramp.

- What are those you prfrez, you dtest?
I think that using a Whammy trs is personal, I love making tapping both hands using the octave and switch between a low position and high position in rhythm, the effect is just amazing . I hardly use it solo without a partner in all directions. Regarding use of an effect over a long period (rhythmic or Młoda) loss of quality of sound is REALLY boring.
Note the little extra that comes from the pedals and no harmonizer can not reproduce: the positions intermdiaire effects, trs trs particular, trs interesting exploit.

- Your score on this?
9 / 10, the two points as missing dt altration the sound, having said that for 200 I did not expect a miracle pedals.

- How long have you use it?
I use the Whammy for 6 months and this daily.

- What is the particular feature you like best and least?
Plus: dmontre it really necessary after a moment, just as a flyod rose to a distortion pedals ect ... and this because of its unique effects.
The least: the loss of quality (but it&#39;s really just compare what the pedals, you can do). The other ngatif that may appear is the misuse of the whammy.

- Have you tried many other models before acqurir?
I use my long multi Zoom GFX-8 effects as harmonizer (it had no effect octave) and the quality mdiocre really silent, I know that there are also different effect pedals only by octave or harmonizer but I was never more than a tent (the things on their quality n&#39;tais not as good as those on the Whammy).

- How do you report qualitprix?
Difficult to find a rel a competitor or any alternative to a 200 harmonizer / octave as easily contrlable. REALLY worth the price. For those who doubt the reliability of the next concert of Steve Vai Astoria, APRS and seeing what he inflicted (kicking strong enough, it stands above the end ... inter alia ).

- With the exprience, you do again this choice? ...
Exprience with this choice I would do if the competition is always the same on the market.

- Your score on this?
I put all of the same evil 10/10 grs default the small of her once active.
See the source
Did you find this review helpful?yesno
Cookies help us improve performance, enhance user experience and deliver our services. By using our services, you agree to our use of cookies. Find out more.