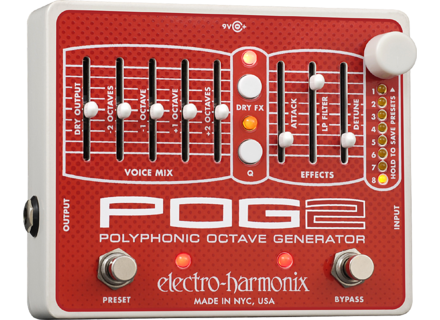 POG2, Octaver/Harmonizer/Whammy from Electro-Harmonix in the POG series.

Value For Money : Excellent
Buy this productView price information >
View other reviews for this product:
It is thus a polyphonic octaver pedal (basically you can make out agreements "octave" sound without too much porridge) with the ability to save 8 presets.
It's digital, but the sauce Electro Harmonix: there is a particular grain in the sound that sounds very far without digital neat personality.
Because of the personality, POG2 has it in spades!
Connectivity issue if it's classic: In and Out in mono jack 6.35, diet a little special 9.6 Vdc/200mA negative center (which is normally supplied original).
I personally tried the 9Vdc/300mA and it works flawlessly.

This is the type of effect relatively plug & play: in 2 seconds we get to find settings that sound. And once we understand the 2/3 subtleties (setting the Attack of the low pass with the button Q) POG2 is very easy to use.
The big plus is obviously the ability to save settings 8, because the possibilities are so vast that it would have been very frustrating not to be able to easily access all these findings sound.

Sound quality issue, it is a little bit all or nothing: you either love or hate.
Indeed, if the POG2 is much better than some digital Octavers among brands (Boss and Digitech for example), it nonetheless much more typical of a PitchFactor at Eventide for example (I only compares the octaver part thereof) which sounds much more "clean".
The POG2 has a tendency to sound in the vein of an organ.
This is also a little lack of sound quality (or vice versa).
This gives incredibly powerful and deep bass, but the attack and resonance of the notes is very typical.
Do not hesitate to listen to the many demos on the web to get an idea of ​​the grain and sounds that delivers POG2.

In the end, I had two and recently I switched on the PitchFactor.
But that said, nothing replaces this quite unique in sound and grain: it is powerful, powers chords take off (unless there note octaver effect is more accurate and efficient) and is POG2 mix very well with a distortion delay eg unique atmospheres!

The POG is one of very very good Electro Harmonix effects, which are references in their genre, and unavoidable for certain sounds (U2 Magnificent example).
Nine for 290 € it's still quite expensive for an effect that is not necessarily obvious place (same composition) and therefore that is rarely engaged (except maybe for the most noisy / texturistes of us) .

But that said, if I remember to take a good price I might be tempted!
See the source
Did you find this review helpful?yesno
Cookies help us improve performance, enhance user experience and deliver our services. By using our services, you agree to our use of cookies. Find out more.