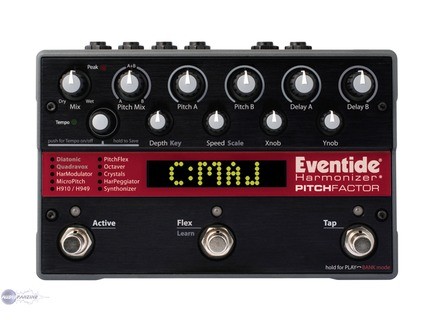 Buy this productView price information >
View other reviews for this product:
This is one of eventide's digital stomp boxes packed with ten of their signature pitch shifting effects such as : Diatonic, Pitchflex, Quadravox, Octaver, HarModulator, Crystals, MicroPitch, HarPeggiator, H910/H949, and Synthonizer. It also has some delay and a built in tuner!!

It's also upgradable via USB, has midi in and out, you can also plug an expression pedal into it.

This is sort of almost an all-in-one pedal version of eventide's rack effects.

I might be missing a few things when I review this, simply because this pedal is very very complex and it is so hard to go into complete detail about this and also very hard to simplify it to just a few words. So i'll try to shoot for something in between-ish..

Ok for utliziation, basically just imagine that you can pretty much tweak every single parameter of the pitch effect, everything. You can even add delay to it for different effects and once you add the expression pedal, you've got it ALL.

I strongly encourage one to look through the manual to figure out how to tweak and set the right options on the pedal. The tuner thing, I had no idea how to do that for a little while until I saw it in a youtube demo and finally figured it out from that. There are a lot of neat things one can do with the pitchfactor and it all depends on what you want to do with it. Though it is rather difficult and has quite a bit of a learning curve, thus the lower score. It's not exactly plug and play.

The sound quality is great. It's all digital of course yet the signal is clear and very high quality as eventide is known to be. Because of this it works great on guitar, bass or whatever you wanna plug this baby into! Be prepared to hear some really really cool sounds!

The pitches are great, the tracking is top notch. Just like eventide stuff is known for, there is nothing lacking in the sound department, that's for sure. Crystals is my most favorite setting ever. I wish eventide would just release a single pedal for the crystals option, I would buy that in a heartbeat. It's so unique and so surreal sounding!

One thing to note about a type of pedal like this is that it's not about 'tone'. It's not about anything vintage or boutique etc. It's purely about the effect and how good it sounds. Eventide has never been trying to emulate or go after the vintage/boutique market so don't expect to hear any type of tones related to such.

Overall this is great! It's jampacked and has everything. It's a high quality built pedal! And it's 10 of eventide's signature pitch effects in a pedal, with as many parameters as the racks have. There are some potential things I worry about; one being how to use this pedal live? It's sort of difficult to get around using live since there are so many parameters, it's definitely the type of pedal that needs to be tweaked before live use. Also switching certain effects on and off seems slightly tedious when I tried, however one of my buddies is using the timefactor live and seems to have no trouble getting what he wants when playing live.

My other concern is the awkward power supply. It just sort of stands out, there's no substitute for it and so you'll have to use the one provided. That means it takes up more space on your board and you can't connect it to any of the pedal bricks that most players own. So it seems that though this is a pedal it's still sort of a 'studio' pedal as one would seem. It does look sturdy, the screen is big and bright, though it does worry me in live situations how it'll hold up to massive stomping and kicking etc. Again though my friend has had no problems thus far.