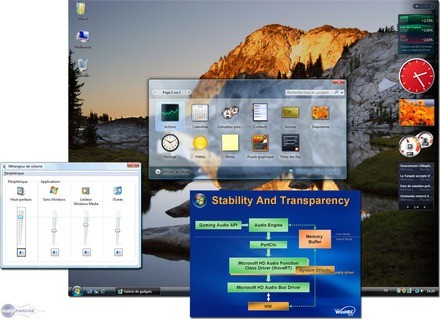 Windows Vista, Operating System from Microsoft in the Windows series.

No incompatibility even with non-optimiss rputs programs for Vista.
The setup is classic, optimization is done almost automatically: the OS is able to learn many things and SuperFetch actually saves time and quick launch xcution.

No problem for this setup, a little j'apprhendais Departure of the processor is a little light, but I am surprised enjoyable. Without being a great warrior this laptop with Vista allows me to do everything I need, including the 3D srieuse (gre large files in Rhinoceros4 and Cinema4D R10, Autocad 2008 and Revit). Fluid on Photoshop CS2 and CS3 (valuation) (I kept the 2 because of budget) on the same formats A0 300dpi RGB with dozens of layers and the vector.

The level it's hard for me to judge. I use a little but FLStudio8 Asio4All pending DCID to me a sound card in srieuse ExpressPCCard (lgion not right now). No cracking despite a good number of VST.

Vista does not strike me as greedy as drama critics I had read about it. This laptop less than 1000euros (FIRST TIME I risk the high-end hardware or not DDI is incredible and surprise me more. Vista is doing its job, and I confess m I allow myself CORPG type games (Guildwars) without fear of weakness.
As against it will not find the hack Systm as some do with XP (not me). Friends more callus in the OS that I have confirmed that Vista is a vritable Russianness technical and outperforms XP in stability and Resistors to attack. I'm willing to believe them, I use the Vista is like new (but in faster with Superfetch) while my XP Pro becomes heavier day by day ...

Lenovo used the last 4 ½ months.
I like the Superfetch feature that allows a performance gain rel.
I like the least I ever disables transparency for the rest I keep Vista Aero design.
I started MS-DOS 5.0, to Win95/98/NT/2000/XPhome + Pro SP1/2/3 then yes, this OS seems good. He asked for the power? And then, when we see that the majority of PCs sold now are capable of running heavy applications, which three years ago ncessitaient racks Xeons do not complain ... especially if it is to toy on Farcry or Crysis. The power of the PC available in all supermarkets is largely able to grate a Vista and run a bunch of stuff, you just know what you want.

The question "to move to Mac OS" I rpond not. I'm not a fan of Macs, let alone the OS and worse: the design of the radiator-toaster MacPro makes me vomit. No, if I need to run 64bit apps with lots of potatoes I turn back to the Sun Solaris and so reliable. Vista and MacOS are not comparable (the design is not rvlateur) and is as good as a. Ah yes, the latest iMac is superb in passing ...

Yes, I make this choice because I just signed a license for Vista Business for my workstation. Nothing said is solid.
See the source
Did you find this review helpful?yesno
Cookies help us improve performance, enhance user experience and deliver our services. By using our services, you agree to our use of cookies. Find out more.