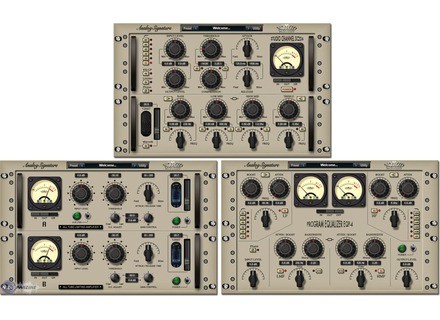 The Nomad Factory Analog Signature Pack is a plug-in bundle that is made up of three different plug-ins. These plug-ins are the Program Equalizer EQP-4, the Limiting Amplifier LM-662, and the Studio Channel SC-226, with the latter of the three kind of being an abridged version of the first two combined. All of the plug-ins share a similar interface and are all pretty easy to use while still maintaining a good amount of available control. I'm not an owner of this plug-in bundle, but the studio I work at has pretty much all of the Nomad bundles, including this one. I don't think users will be needing a manual, although I haven't seen it for myself.

Where I work at the studio, we've got the Nomad Factory Analog Signature Pack on all of our systems that I'm aware of. All of them are Pro Tools HD systems however, so I can't say I've ever had a problem running any plug-ins on any of these systems. This kind of makes it hard to judge the performance value of the Analog Signature Pack, but my experience with Nomad Factory plug-ins in general is that they usually won't lag your system, but it really depends on what you're running it on.

The Nomad Factory Analog Signature Pack is a nice little bundle and is one that can be had for quite cheap. While these 'analog' plug-ins aren't a replacement for true analog gear, they are still pretty good sounding plug-ins and good for mixing and mastering purposes. I like the Studio Channel SC-226 the most of the three as it's the one I use most often since it incorporates both a limiter and a EQ in one. The others are great as well, but for use in more specific situations. They are definitely pretty full and warm sounding, but again, not a replacement for real analog gear as it's just not as good sounding. That being said, the Analog Signature Pack is still a good one to have around, especially at the cheap price...
Did you find this review helpful?yesno
Cookies help us improve performance, enhance user experience and deliver our services. By using our services, you agree to our use of cookies. Find out more.