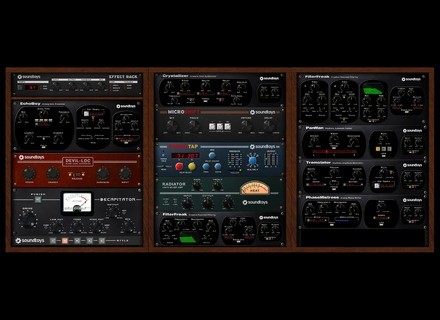 Soundtoys 5, Other effects bundle or multi-effect from Soundtoys.

A review of the Soundtoys 5 native effects bundle

From EchoBoy to FilterFreak to Crystallizer, Decapitator and more, Soundtoys plug-ins are super-creative tools that offer users the potential to take their music to new sonic places The new Soundtoys 5 native bundle (Mac/PC) offers that and then some, with the addition of all the plug-ins the company developed subsequent to the release of the previous bundle, Soundtoys Native Effects 4, plus a brand new plug-in, Primal Tap. What’s more, the company has added the Effect Rack, a container plug-in that can host multiple Soundtoys plugs simultaneously.

Before going into the specifics of the new stuff, let’s compare the Soundtoys 4 and 5 bundle plug-in lineups. I should interject that all of these plug-ins are now also available as single purchases — you don’t have to buy the bundle to get them. Previously some of the “Little” plug-ins like Little Primal Tap and Little Radiator were not available singly. The bundle is a lot more cost effective from a price-per-plug-in standpoint.

As you can see, there’s quite a difference in the number of plug-ins. One thing to bear in mind, though, with the exception of Little AlterBoy, which is the only one of its type, all the “Little” plug-ins that are now included in the bundle give you similar functionality (albeit more limited) to the full versions, so they aren't offering anything particularly different except a little less CPU usage. As mentioned, Speed is no longer in the bundle. According to Soundtoys, you can contact support for an installer and authorization so that you can still access it if you need to.

Soundtoys has also changed its copy-protection scheme for the better. In the past you had to authorize your Soundtoys plug-ins to an iLock dongle. You can still do that, or you can authorize two different computers using the iLok software, but without a dongle. This is a positive development for those who have more than one computer that they use for music. It makes it a lot easier to seamlessly switch between your two machines, if you don’t have to move a physical iLok back and forth.

The new Soundtoys bundle no longer supports RTAS, so if you’re on Pro Tools 9 or earlier, it won’t be compatible.

One of the most significant additions to Soundtoys 5 is the Effect Rack plug-in. It’s a container that allows you to stack multiple Soundtoys effects inside of one insert. It reminds me a lot of the Slate Digital VMR interface, although it’s vertically oriented whereas VMR is horizontal. 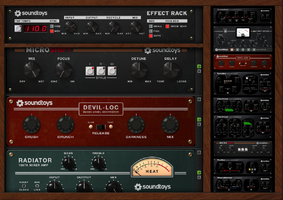 The Effect Rack features a large “rack” area, with a vertical column on the right in which you see the Soundtoys 5 effects, minus the “Little” effects, which you have to instantiate separately (more on that in a bit). To add an effect to the rack, take one out, or change the order of the effects, you simply drag and drop. You can also drag effects around inside the rack to change their order. If you drag an effect on top of another that's already in the rack, it will replace it. When sitting in the rack, each effect has a button that lets you turn it on or off or solo it.

My only issue with the Effects Rack is that it feels a little tight, space wise. When you're dragging in a new effect and there are already a couple in there, it's harder than it should be to drop it in cleanly — I often ended up accidentally replacing an existing effect in the rack when I was trying to add one above or below it.

At the top of the rack sits a permanent module called the Control Panel, which houses a variety of global controls. The Tempo controls let you set the rack to MIDI tempo, Free tempo or to tap in a tempo. You also get Input, Output and Mix controls, as well as a knob called Recycle, which lets you bring in a copy of your signal back into the mix. This can be used to create flanging effects, and even add more complexity to the sound of certain effects such as Crystallizer.

The Buttons on the right let you adjust the size of the rack to either the fixed sizes Small and Full, or the responsive setting of Auto. Finally, you get a button to hide or show the gear.

The Effect Rack makes it a lot faster and easier to experiment with different combinations (and effects orders) of the Soundtoys plug-ins, and encourages even more creative uses of them.

I asked Soundtoys about why the “Little” effects weren’t in the rack, and they said that they are hoping to integrate them in the future. In the case of Little AlterBoy, the issue is latency, because that plug-in adds quite a bit, and it would be tricky to integrate that with other plug-ins inside the Effect Rack. We’ll see what they come up with in subsequent updates.

A while back, Soundtoys released Little Primal Tap, but Soundtoys 5 brings with it the full version Primal Tap, which is an emulation of the Lexicon Prime Time Model 93 Digital Delay Processor, first released in 1978. 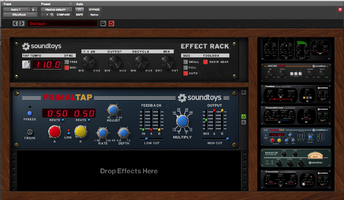 Primal Tap is a stereo delay processor, but hardly a typical one. It offers linked or independent control of the delay times for the two channels: A and B, which can be synced to the DAW tempo or adjusted freely.

The Multiply feature is particularly cool. It’s controlled by a knob with four possible settings: 1X, 2X, 4X, and 8x. Its based on the feature in the original Lexicon unit, which extended delay time. Due to the limits in digital technology at that time, the Lexicon unit was designed to compensate for increasing the delay time by lowering the sampling rate of the delayed signal. True to the original, Primal Tap's 1X setting yields a 12kHz bandwidth, the 2X setting 6kHz, the 4X setting 3kHz and the 8X setting 1.5kHz. So it has the effect of exaggerating the low-fi nature of the delayed signal as the delay time on the multiply knob is set higher.

Turning on the Freeze button lets you capture and loop a short section of the delayed audio for as long as the button is left on. The level of looped audio that you hear is based on the setting of the Mix slider. If you put the slider up to fully wet, you’ll hear only the delayed signal. The combination of the Multiply setting and delay time settings govern the length of the loops. The possibilities are pretty wide-ranging for creative experimentation, and changes to the Multiply knob can be automated.

The Feedback section does more than just let you increase the amount of taps. Cranking it up adds saturation that is quite warm sounding, and very useful. The setting on the Feedback’s Input slider governs how much saturation you get. The higher the setting, the more saturation.

Finally, an LFO section featuring Rate, Adjust, and Depth controls is included. You can use it for everything from subtle chorusing to really whacked-out pitch-bent notes.

Primal Tap has a Tweak menu (many Soundtoys plug-ins have Tweak menus that let you change the internal parameters of a plug-in) that lets you change several parameters including delay algorithms. You can switch from the default Classic Mode algorithm, where the A and B delay outputs are combined and routed back into the inputs, to such choices as Criss-Cross, Ping-Pong, Series, Parallel and Reverb, all of which give you different routings that cause different delay behavior. The Reverb mode is designed to keep “runaway feedback” at bay, thus making it easier to create more reverb-like settings.

Primal Tap is way more than a simple delay, it’s like it’s own multieffects unit. I haven’t had this much fun with a delay plug-in since…EchoBoy.

Originally a plug-in that Soundtoys offered for free, this very capable vocal pitch-shifter/harmony processor is now offered for sale on its own, and is included in the Soundtoys 5 bundle. We’ll cover it here since it’s almost new and we haven’t reviewed it previously.

It’s capable of shifting a vocal’s pitch by plus or minus 12 semitones, and the quality is quite good, even at extreme settings. The Formant control, can change “gender” to go with the Pitch shift when the two are linked, or can be operated independently.

You get three Mode choices: Transpose, Quantize, and Robot. Transpose is standard pitch shifting, Quantize gives you the hard-tune effect, and Robot keeps the pitch shifted note at a constant pitch, depending on your Pitch knob settings.

Finally, you get a Drive control to add saturation, and a Mix (wet/dry) control, which is integral in setting the plug-in.

Despite that simple control set, Little AlterBoy is capable of a lot of different pitch and harmony effects. Using the Mix control to adjust the level of the harmony voice, you can create octave up or down doubles, and standard harmonies when in Transpose mode.

Robot mode is useful for more than just special effects. It can freeze the transposed note, turning it into a pedal tone that the melody moves against. The hard-tune effect you get in Quantize mode gives you another flavor, and if you combine it with some changes in the Formant setting, you can create sounds beyond the clichéd “T-Pain Effect.” If you want distorted, rock-vocal settings, the Drive effect, when not set too high, sounds really good.It may not have a ton of adjustable parameters, but Little AlterBoy is a very powerful plug-in for processing vocals.

(To hear examples of Primal Tap, Little AlterBoy and other Sountoys 5 plug-ins, check out the video at the end of this story.)

Also new in Soundtoys 5 are changes to some key plug-ins. Tremolator, the tremolo processor now has a “Feel” control, which lets you adjust between two extremes: “Rushin” and “Draggin.” It basically alters the delayed part of the tremolo signal slightly in time, so that it’s a little more aggressive (Rushin) or laid back (Draggin). That along with the existing Groove control make Tremolator capable of a lot more than just surf rock guitar settings (although it does great at those too). You can get some pretty unusual patterns from it.

According to Soundtoys, your v.4 sessions will load fine for the most part in v.5, but due to the changes in delay time in EchoBoy and Crystallizer, there may be some slight differences when using those effects. The company suggests that you read this page on their support site for more details.

A bundle of fun and power

Soundtoys 5 ($499) offers a huge selection of powerful and creative effects. It’s not inexpensive, but it is a really good value. Upgrade pricing from Soundtoys 4 ranges from $50 to $199. A straight upgrade from Native Effects 4 is $199, but if you also own other Soundtoys plug-ins, the price will be less. According to Soundtoys, its best to go to your online account at their site in order to check what your upgrade price is.

If you have the Native Effects 4 bundle, I recommend the upgrade highly, as you get quite a few more plug-ins including all of the ones released after the v4 bundle came out, including Primal Tap, Little AlterBoy, and Devil-Loc Deluxe, to name a few. If you don’t own any Soundtoys products, and you’re looking for a bunch of powerful and unique delays, modulation, pitch shifting, distortion and a whole lot more, check out Soundtoys 5. The company offers a 30-day free trial of the entire bundle, so you can thorougly test it out for yourself before you decide whether to purchase. I'm betting that you will decide "Yes."

Watch this video to see and hear Soundtoys 5 in action.

Post a comment 1 comment
Buy this product
View price information >
Viewers of this article also read...
Cookies help us improve performance, enhance user experience and deliver our services. By using our services, you agree to our use of cookies. Find out more.