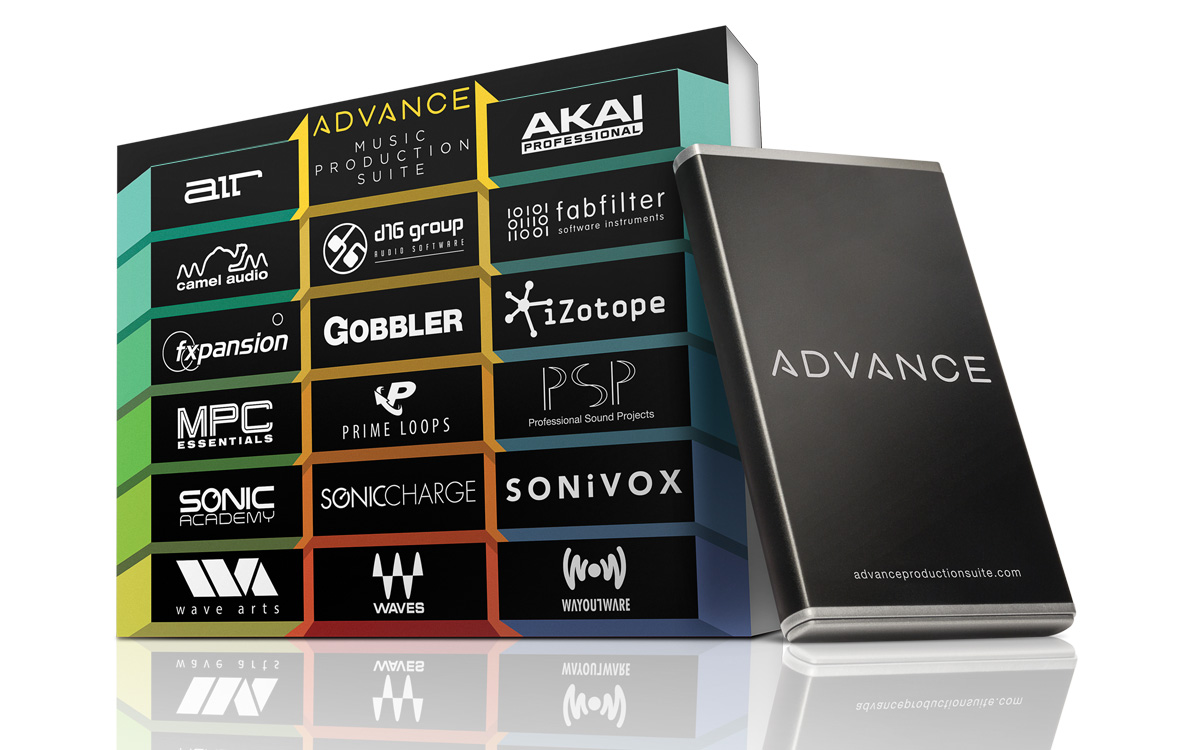 The AIR Advance Music Production Suite makes it possible to obtain a large and diverse collection of studio software with a single purchase. It contains 34 virtual instruments, including all the major AIR titles as and a range of titles from other developers including Camel Audio SONIVOX, Akai Professional, D16 and more. In addition, you get 17 effects processors from industry heavyweights like Waves, PSP, and iZotope, Wave Arts and more. Also included is a collection of loops (leaning heavily on the EDM side), and discounts on gear from Akai and M-Audio, and for services like Gobbler and Sonic Academy. The suite comes on a 500 GB USB drive and costs $599. Let’s take a closer look at what you get.

When you compare the Advance Music Production Suite to Native Instruments Komplete, the other multi-instrument, multi-processor mega-bundle available, there’s one area in which the latter wins hands down: installation. There are two main reasons for this. First, Komplete’s individual components (with the exception of some Kontakt libraries) are all from Native Instruments, and can be installed as a group, and authorized with one tool, the NI ServiceCenter application.

The Advance Music Production Suite, however, is made up of software from many companies, and each title has its own installer and installation requirements. As a result, in addition to waiting as you load the multi-gigabyte libraries that come with many of the products, you’ve got to authorize each one (or at least the ones from different developers) separately. Included in the box are cards for each developer who has products in the bundle, and these contain the serial numbers or activation codes needed for authorization. Overall, the installation process is long and tedious. I found myself wishing that AIR could have come up with an umbrella installer that would let you choose and install the components you want, in one step.

The second reason that Komplete has a major advantage from an installation standpoint is because  it gives you freedom to install its sample content on drives other than your internal drive. Even though the Advance Music Production Suite comes on its own hard drive, it gives you no option to save sample content to a different drive. You have no choice but to use up 200 GB of your internal hard drive space, if you install all the components.  “Streaming content from the USB hard drive is not supported”, says the manual. Only the loops can be used directly from the included USB drive. Especially if you’re installing on a laptop, whose internal drive may not have the capacity of a desktop model, this can be a real problem.

Installation issues aside, the Advanced Music Production Bundle offers an awesome collection of products, especially in the area of virtual instruments. The VI lineup starts with a number of AIR’s major offerings: Loom is a great-sounding modular additive synth with a very cool graphic display. Velvet 2 is an electric piano instrument with impressive Rhodes, Wurli and Hohner modeled electric pianos and gobs of effects to dress them up with.

Hybrid 3 is a 6-oscillator subtractive and wavetable synth, with a huge range of available sounds. Strike offers you a wide variety of drum kit sounds and grooves, allowing you to program parts and export them as either MIDI or audio files. Transfuser, which can be opened as an instrument or effect, gives you the ability to slice up and alter audio. Structure 2 is a software sample player with lots of included instrument sounds, and Vacuum Pro is a powerful sounding subtractive synth with tube emulation.

From Akai Professional comes MPC Essentials, a software version of an MPC drum pad instrument. It can run either as a plug-in or standalone, and gives you lots of beat-making options. The standalone version can host third-party plug-ins.

Another included synth is Twin 2, from FabFilter, which offers warm and fat sounding virtual analog synthesis. Also quite capable is the Camel Alchemy Player, which comes with includes the Taste of Camel and Big Tone expansion packs. Way Out Ware contributes its TimeWarp 2600 instrument, an Arp 2600 emulation with front panel controls and patch cables. It also features presets from the likes of Richard Devine, Robert Rich and several others.

Rounding out the instrument collection is Sonic Academy’s Ana (which stands for “Analog Noise Attack”), an analog-modeling synth that’s clearly designed for EDM. It features good sound and programability, but a rather small number of preset sounds.  Overall, the instrument portion of the bundle is deep, varied, and quite impressive.

The bundle offers you a selection of compressor and EQ plug-ins. These include FXpansion’s D.Cam Chancomp, a channel compressor; Buscomp, a bus compressor; Crosscomp, a frequency-selective dynamics processor that lets you dial in a particular frequency range to process; and Envelope Shaper for controlling transients. PSP contributes two EQs, RetroQ, which offers semi-parametric low, mid, and high bands, plus a High-Pass Filter and Saturation option; and McQ, a console-style EQ with high- and low-pass filters, and Low, Mid 1, Mid 2, and High semi-parametric bands.

From Waves comes the Renaissance Channel, which is a highly regarded virtual channel strip with EQ, compression, limiting and gating. Wave Arts’ FinalPlug, a mastering compressor/limiter that’s also quite handy for mixing, is included, too.

A variety of effects plug-ins are included, letting you do everything from adding reverb to slicing and mangling the audio. They include a number of plug-ins that are very well suited for EDM, such as iZotope’s Stutter Edit, which lets you add BT-style stutter edits to your audio. Four effects from D16 Group are included: Fazortan, a phaser; Syntorus, an analog-style chorus effect; and Devastator, which offers multiband distortion. The other D16 effect, Sigmund, is billed as a High-Quality Flexible Delay Unit, and it offers a ton of sound shaping options such as overdrive and modulation. FXpansion’s Bloom is another delay with a lot of extras, including modeled tape delay, frequency shifting, LFOs, and sequencing of the delay taps, which is amazingly cool.

FabFilter’s Simplion is an easy-to-use and good sounding filter effect. I enjoyed Sonic Charge’s Permut8, a 12-bit delay that’s designed to emulate “primitive digital signal processing hardware.” It’s yet another effect that lets you do some serious sonic alteration.

Only one reverb is included, but it’s a good one, Masterverb 5 from Wave Arts. Not only does it have rich sounding reverb, but also plenty of parameter control.

The Advance Music Production Suite features 16 different loop collections from Prime Loops. You get everything from Rasta vocals to electric piano parts, EDM construction kits, drum machine loops, pop guitars, and impact effects. The loops are in Acidized WAV format, and the collections vary in size. Like some of the other aspects of the bundle, the loops lean toward the EDM, hip-hop, and cinematic worlds.

A free 4-month, 50GB account with Gobbler, the cloud-based music file storage site, is also part of the suite.

Finally, you’re given a “rebate code” offering discounts on a selection of Akai and M-Audio hardware, ranging from $25 to $100, depending on the product. Some examples include $100 of Akai Pro MPC Studio music production controller, $50 off the M-Audio Sputnik condenser mic, and $100 off the M-Audio M3–8 studio monitors.

The AIR Advance Music Production Suite is an ambitious product featuring an extensive and diverse instrument collection, plentiful effects, a nice group of loops and other extras. With 200GB of total content, you get a lot for your money. In fact, according to AIR Music Technology, the combined cost of the suite, if you purchased its components separately, would be in the neighborhood of $5000. Considering that the suite costs $599, the discounts are quite significant.

Other than the tedious installation process and the fact that virtually all the content needs to be installed on your internal drive, I was quite impressed with this product. It gives you all the software you need for serious music creation, especially if you’re into heavily electronic styles.

Komplete provides very tough competition, but if you prefer a plug-in collection culled from a variety of companies, rather than only one, the Advance Music Production suite might just be the ticket.