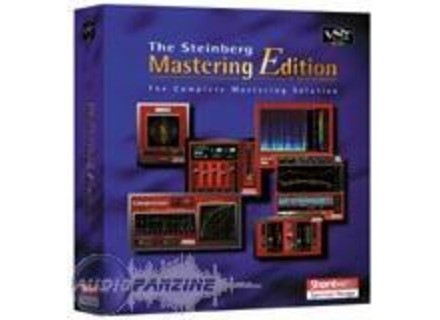 Mastering Edition, Other effects bundle or multi-effect from Steinberg.

Installing the Steinberg Mastering Edition plug-in bundle was quite simple and as easy as installing any other plug-in that I have used. I had no compatibility issues at all as I was running these plug-ins within Steinberg Cubase SX. I had everything installed within a matter of minutes and it didn't take too long after that to figure out what everything does within each plug-in. The bundle contains a loudness maximizer, a filter, a compressor, a spectrograph and phasescope, and a spectralizer. While I mostly used the compressor and the loudness maximizer, all of the plug-ins in this bundle are very helpful when it comes to mastering. The interface of the plug-ins is pretty easy to follow and while I've never seen a manual for this bundle, it is easy to use and you really don't need one if you don't already have it.

When I was running the Steinberg Mastering Edition plug-in bundle I was running it in Cubase SX on a Hewlett Packard lap top that has a 3.0 Ghz processor and 2 GB of RAM. I never had any problems at all running these plug-ins within this configuration, as everything always ran smoothly and stably for me. Since these are indeed mastering plug-ins, I usually only run one of each at a time and nothing really beyond that, so I can't speak to how well they would run if you wanted to use multiple plug-ins at once of each. However, since they are designed for mastering I am assuming that most will be using them like I have used them, which is only for mastering and only one at a time. For this type of use I've never had a problem with the Steinberg Mastering Edition bundle.

I've been using the Steinberg Mastering Edition bundle for about five years and it is definitely an effective mastering plug-in suite. It has pretty much everything you would want for mastering and each of the plug-ins in the bundle are useful and easy to use. They also sound great and each plug-in is also pretty versatile. The price of the Steinberg Mastering Edition bundle is also very reasonable and is really perfect for the home studio owner looking to get a few mastering plug-ins on a budget. I've come to trust Steinberg's software and this plug-in bundle is another example of their fine work.
Did you find this review helpful?yesno