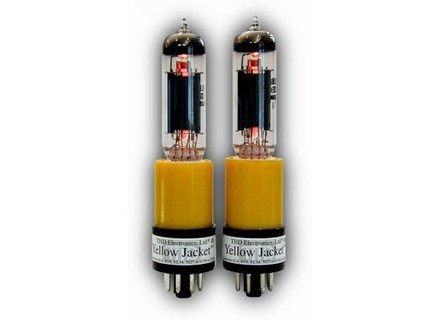 The THD Yellow Jacket is an adapter to use EL84 type tubes in amps that use 6v6/6L6/EL334/6550/KT66/KT77/KT88 power tubes.
This is the easiest way to mod your amp, plus it’s a plug and play reversible modification.
They drop the voltage and current the tube sees, this way you can use a smaller tube in place of a bigger one without toasting it. In addition to that it will let you the EL84s pin-out which is a 9 pin tube in place of the regular octal 8 pins.
What does it sound like? Depends on what you start with, as a rule it makes your starting point half an AC30...sonically.
They come in numerous versions, for grid biased amps, like Mesa, marshall, Fender type stuff, for cathode biased amps like Fender Princeton and Champs, as a non power reducing version of cathode biased amps, etc...
So back to tone...I used to have this 72 marshall Super Lead was ungodly bright. With a Strat I could never use the bridge pick-up, until I put some Yellow Jackets in it. The ear piercing upper mid spike was replaced with a bell like top end, and I was actually able to finally use that amp on the bridge pick-up with my at that point fave Strat, which was a Suhr Classic.
The other cool thing about the Yellow Jackets is that you can...in amps that run 4 power tubes run them together with two of the original tunes. This 2+2 set-up in a Marshall or Fender Twin will give you the best of both worlds. With the big bottles taking care of the bottom and punch, and the EL84s delivering the sustain and top-end.
And of course the smaller tube reduces volume as a side effect...a Super lead with 4 yellow Jackets foes from 100 watts to 60, run a pair of Yellow Jackets only and you got a 30 watter, run it with 2 Yellow Jackets and 2 EL34s and you have a 80 watter.
Did you find this review helpful?yesno
Cookies help us improve performance, enhance user experience and deliver our services. By using our services, you agree to our use of cookies. Find out more.