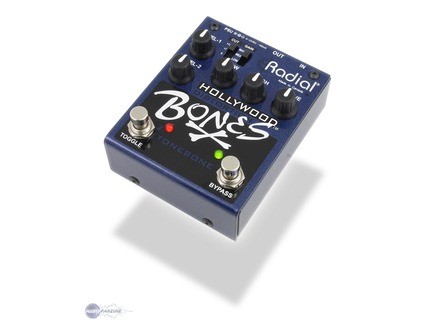 Bones Hollywood, Other guitar saturation effect from Radial Engineering in the Bones series.

After the success encountered by its Tonebone series, Radial Engineering has announced a new series of guitar effect pedals for guitars: the "Bones".

According to the brand, these new models have kept the spirit of the Tonebone with a certain number of differences: While the Bones Series claims to have kept most of the assets of the Tonebone range (dual channel function, solidity and sound quality), the price is said to have been toned down.

The first 4 models announced are as follow:These new effects should be available very soon, with other models in the series still to come in 2009. No MSRP officially announced.