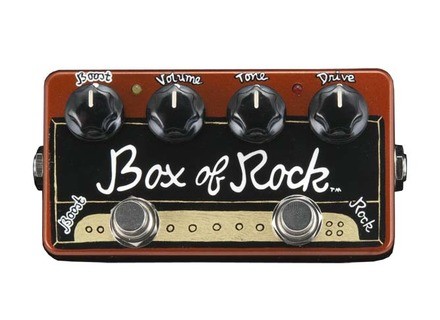 Box of Rock, Other guitar saturation effect from Zvex.

Buy this productView price information >
View other reviews for this product:
The Zvex Box of Rock is a great little distortion pedal that is designed for electric guitar. I haven't used it for anything other than guitar, so this review will be focused on the application of the pedal only, which is indeed it's intended use anyway. There is a Vexter Series version of this pedal, but this review is for the original. It's an analog pedal consisting of 1/4" connections for input and output, and a nine volt battery compartment. It isn't rackable since it's a foot pedal.

You don't need to have all that much experience in order to operate the Zvex Box of Rock. The parameters should be familiar to most users who have used distortion pedals before, which is somewhat strange for a Zvex pedal since usually they have some wacky parameters. I guess that since this was their first distortion pedal they decided to keep it nice and simple. The setting controls that it has are for boost, volume, tone, and drive. It has a separate boost switch for engaging that feature of the pedal, which is separate from the main distortion section. I didn't need help from a manual to use this, and don't think anyone will unless you're just starting out.

In general, the sound of the Zvex Box of Rock can be described as being a full and transparent distortion effect. It's definitely a traditional distortion/clean booster at heart, great for all types of rock music and behind. I'd say it's best for getting a classic rock sort of distortion sound, but it's versatile and can certainly be used across the board. The clean boost is also a great addition to the Box of Rock, as it sounds great for giving your lead parts a little extra something.

The Zvex Box of Rock is pretty much the perfect distortion pedal for getting classic distortion sounds. It's not reinventing the wheel or anything like that, but it's got a super transparent and thick sounding distortion effect that almost any guitarist will love. While definitely a bit expensive, if you take a listen to this pedal you'll understand why it is, and it's because it's simply a very well made pedal with a professional distortion sound. I've got no real complainants here, as I'd use the Box of Rock for all my classic distortion sounds if I owned one...
Did you find this review helpful?yesno