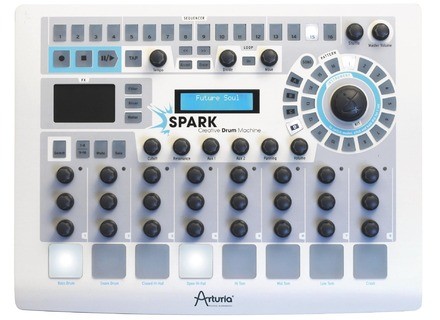 Spark, Other MIDI Control Surface from Arturia in the Spark series.

All user reviews for the Arturia Spark

can not be easier! really simple at all points

attention however to the ram (I really advice 4GB)

I have used it mainly for the electro and old school tribe.
sounds really good (arturia what!)

I like the way to play on, the varieter sounds, the possibilities of really top publishing and design ..

The least: the consolidated cpu ...

I unfortunately am separate (sale of aillor) but it breaks my heart!

3 of 11 people found this review helpful

next_i's review (This content has been automatically translated from French)" Excellent!"

Arturia Spark
5
The Spark is a rhythm box is software with a hardware controller.

Regarding the characteristics, there are all the details on the manufacturer's website.

Construction is serious and inspires confidence. The pads are very good and very pleasant to the fingers.
The installation and operation is very simple standalone and does not break problem.
I installed it in under Reaper VST. Works well except for some fairly high latency times. I have not yet found the cause, to dig.
The interface is very intuitive. The interface is well thought out and within minutes you forget the technical side to make only sound.
And in case it hangs on something, the manual provided (in real paper please!) Is clear and there are easy answers to our questions.

There is a beautiful palette of sound banks that sound! Be somewhat lacking one or two banks more acoustic.
At the creative level, there is plenty to do. They just add their own sounds and create their own banks.
Each instrument can be filtered, pitched, breaded, etc., etc. .. and individually.
The mixer allows you to add effects such as compression, delay, crush, distortion etc. ...
I found particularly effective especially integrated compressor to create Kick pêchus.
I love the FX pad that allows the application of reverse effects, tape, strobe, etc., live.

I use it for three months.
Previously I had tried NI Maschine.
The most:
-The creative possibilities and sound quality of banks.
SAV-A real answer for that.
-Solid construction.
Cons:
-The inevitable use of the mouse (right there ... I quibble).
The Spark is a execllente machine and this choice I would do without hesitation.

Manuel really well done is rare. And especially one that will sav rponds.

To me the sounds are standard, while doing what I expected.
I use it to accompany the dancers. However, two small default.
For now no record MIDI, but the update quickly Pipelines Limited.
And impossible to use without a computer unlike spark my tr 707.

For 2 weeks.
Yes I have almost everything essay.J 'have a very dailleurs 707
Report quality price, although a careful maschine plac.Mais good example.
Yes I would do this choice.

cess01's review (This content has been automatically translated from French)" Huge"

Get started fast, basic operation very simple and intuitive everything is in the manual is very well explained!

sounds very clean and the net effect a gogo I did not use too original sounds at the beginning because I was just really clear! battery levels I never used a drum machine with the same sin that emulates both the box that sounds real! but finally when c can have a shoot later in the edit sounds (internal or import) and its effect becomes very interresting c the spark that releases all its power and frankly it has serious potato! I can not think up to make wobble bass with this machine we call "creative DRUM machine" in fact I use it rained and rained, I realize that there really is a lot of opportunity and diversity at both levels of the sounds to use the spark of course must be triturated every knob (for those who like

! I made the dub / dubstep coupled with a virus and my my emx b while its in sync via Abelton! and nikel works!

How long have you use it?
since its release
Have you tried many other models before buying it?
I believe that machine sounds NI is only competition there and frankly not interest me!
What is so special that you like most?
that there is no limit in the editing and creating the spark!
the seriousness of arturia c in product and customer service!
the controller (even if it lacks the sides of wood

sounds and effects!
in short the spark!
the least?
still lacks any instrument or fx different that I would see in the genre: guitar trumpet ... but I trust that knows us has arturia pack offered varied!
If I remake it again the same choice and I can even take two!!

cess01's review (This content has been automatically translated from French)" Huge"


Getting very quick hands, very simple and intuitive basic operation everything in the manual is very well explained!

very clean and crisp sound effect of a gogo I did not use too the original sounds at first because I just found them very clear! battery levels I've ever used a drum machine with as much sin that emulates both box that sounds real! but finally c when pushing a can have later in the edition of sounds (internal or import) and its effect becomes very interresting c the spark that releases all its power and frankly it serious potato! I thought up may not be able to make wobble bass with this machine we call "creative DRUM machine" made in I use it rained and rained I realize that there really is a lot of possibility and diversity at both levels of the sounds of use of spark course must triturated every knob (for those who love

!!! I did dub / dubstep coupled with a emx my and my b virus while its in sync via Abelton! and works nikel!

How long have you use it?
since its release

Have you tried many other models before buying it?
I think NI machine sounds only concurant me and frankly not interested in it!

What thing do you like most?
the made that there is no limit in the edition and creation with the spark!
the seriousness of arturia in product and service c!
the controller (even if it lacks the wooden sides

sounds and effect!
in short the spark!

the least?
still missing some instrument or fx various well that I would see in it like: trumpet guitar ... but I trusted has arturia who knows we proposed varied pack !!!

if it were to do again I remake the same choice and I would even can be two !!!!

dropoff Window
Did you find this review helpful?yesno

Arturia Spark
5
Go read the page on the site builder

Powerful sound, samples embedded that will delight fans of the first drum machines. Sounds "analog" with TAE and the excellent work of Arturia which are well known for their vintage synth VST. Ability to import their own samples, change them. After we like it or not. But this is very good.

Bought not long ago, I quickly built this machine to my config. Coupled with an Arturia Origin Nuendo, all is well oiled. The following spark terribly well. The pads respond and ask for more, the creative possibilities are endless.
Already seen with the origin, Arturia remains in its approach to creative freedom based machines legendary. Level support, always the same, the updates are there regularly to correct any bugs (do not forget that we are dealing with a software) and members of arturia answer your questions. On game modes, it can easily be used in standalone, or controlled by a software computer music. Even in slave mode, it remains a great deal of live in the game, especially when using the built-in effects with the touch area (Pad FX), and by changing and editing pattern that is just fantastic level design. Ability to disable the quantification, which can record on the fly, creating rolls wherever you want ... short a killing!
I had a Yamaha RS7000, I think unfortunately it will regain its board, because even if it was previously one of the best hardware sequencers (drum and synth), Spark, when used with a sequencer computer music, offers a section drumbox much more modern and suitable for creating electro (not only) of today who want quick and easy.

Arturia Spark
5
16 pads for the sounds of 4 + 16 Pads able to program rhythmic sequences
Ability to import their own samples (really excellent) and tweaking with the synthesis of the software and for much without a mouse thanks to control the Muste ....
Internal mixer with separate outputs, volume, pan and two auxiliary
Possibility of 2 + 2 internal effects effects on natural enemies and 2 master effects
Many of the Bar are emulated legendary TR-808, 909.606, Lin-Drum and many other
The sequence is in the style of Roland
I personally do not like the styles of MPC when my choice for this sequence is simple Spark can be quantified or not quantified
he is working on four measures and it has a pattern or song mode with remarkable simplicity and speed to mount a really good songs but really it is the reason behind my choice + control software alliance is perfect
For the rest see the documentation in French managed to clear the site and available

Configuration is very simple to just 1 / 2 day to understand and control the software and then finds himself already created the pattern and position to mount a song
As mentioned the manual is clear and sufficient
The sound effects editing and sequencing is very simple in style for the Roland sequencer "love"
In fact initially I wanted to take the Europa Analogue Solutions, which is roughly the same price but requires an additional sound module is the control it emulated the Bar can import samples and personal software for increased visibility edition through the computer screen so my choice was quickly made

The aesthetics of control is managed super is not super plastic pads meet the style reminds me a bit was originally in fact I think it was created for this purpose because the couple with resemblance is obvious I found ....

I use it since its release

I like the least I
missing functions to the control that makes use of the mouse when it is necessary functions could be integrated without regard to the departure for a higher price but one that would have added one more really a shame really .... Spark damage
There will surely be a pseudo MKII version in order to add new function and that is that all those who believed in this duo Soft Control "me in this case" will be disappointed unless the Arturia is a good idea to make a update the control by a recovery or other .... a think ....
The value for money is correct
With the experience I would do the same choice is more than some