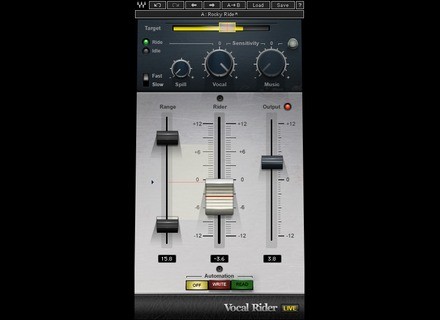 Buy this productView price information >
View other reviews for this product:
Levels are something that should always be watched, and when you have vocals with a huge dynamic range, constantly tweaking the level with automation gets to be a real pain. Waves has released a vocal rider plugin which helps try to even everything out without having to manually write in tons of different volume automation. It's an extremely handy plugin, despite it being simple in operation. The plugin has quite a few features for being such a simple plugin. Aside from the main sliders of range, vocal ride and output, it also has knobs for vocal/music, a switch for fast/slow and a few other small features that really help shape how you want the vocal rider to function. To use this, simply enable it on whatever vocal buss(es) you have and set it. You generally want to put all the vocal busses into one master aux buss and put this as close towards the last plugin. I never read the manual, but this is so easy to use that it shouldn't be needed.

With today's metal vocals, you tend to find a mix of singing, growls, screaming and other types of styles mixed in. It can be a real pain to constantly adjust all of those levels manually, and I've found that this plugin can help quite a bit. When things get very extreme, I find that it can sometimes be a bit odd, but it could just be me dialing it in incorrectly. Regardless, it's a very good plugin that I've used quite a few times before to help level everything out.
Did you find this review helpful?yesno