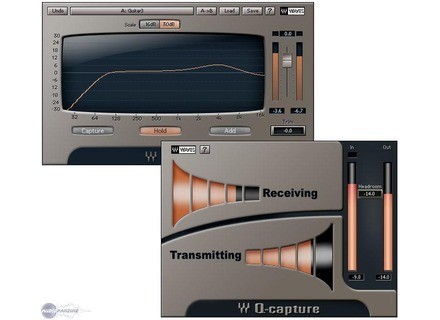 Q-Clone, Other software EQ from Waves.

Buy this productView price information >
View other reviews for this product:
There is no simple ... => What WAVES!

I shoot with Nuendo 3.1 on a PC with Athlon 64 3700 +
It works without any problem as elsewhere, this config

So it is really a good idea this plug.
I think many have not understood the principle:
Indeed, there are presets (Custom, I have not even tested, it does not interest me more than that) but the point is that the impulses Qcapture made several times per second the hardware EQ, and after it inserted on our slices the Qclone. And the curve represents one puts qd "capture". when we decided to move to another track, we put "Hold" and EQ is. So for the rest of the tracks.
This is really screwed ... It's expensive to c ... but it is true that one be able to Avalon EQ, Pultec or neve on each track, it's still not bad.
Another view below have said its problems, its a "medium". I do not worry. It's great! At least try, but no matter how (and pi c qd even for those who have the right hard!) Otherwise useless!
See the source
Did you find this review helpful?yesno
Cookies help us improve performance, enhance user experience and deliver our services. By using our services, you agree to our use of cookies. Find out more.