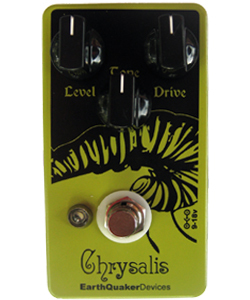 View other reviews for this product:
moosers
Publié le 11/11/10 à 17:01
The EarthQuaker Devices Chrysalis is a super high quality overdrive pedal for use with electric guitar. Like all pedals, you could use this with any electronic instrument if you wanted to, but it's definitely best suited as a pedal for electric guitar. The pedal is modeled to be a sort of vintage 70's overdrive, and they definitely did a good job of nailing this kind of sound. The pedal is made up of analog components and has 1/4" connections for input and output and the ability to power it with any supply ranging from 9 - 18 volt (the higher the volts, the more headroom). It isn't a rackable piece of gear as it's a stomp box.

The configuration of the EarthQuaker Devices Chrysalis pedal couldn't be much simpler. It follows that same basic make up for a distortion/overdrive pedal that you'll find on most pedals of this kind. The three parameters that it has are for level, tone, and drive. A manual definitely isn't necessary for this pedal...

The tone of the EarthQuaker Devices Chrysalis makes it one of the most transparent sounding overdrives that I've ever used. The signal is overall one of the cleanest I've heard in terms of having no noise and being able to hear everything being played even though it's distorted. Too many overdrive pedals out there distort the sound to the point where you can't even make out what's being played. Think of the exact opposite of this and that's what you've got with Chrysalis. In my opinion it's best for subtle to a medium amount of overdrive, but it sounds great cranked as well. You may find some pedals out there to be comparable in terms of quality, but not many will be better...

If you are looking for a boutiquey sort of overdrive pedal for your guitar rig, the EarthQuaker Devices Chrysalis is just that. It's not nearly as expensive as you might think it is, and it pretty much sounds like you're using an amp's overdrive. If you don't know about Earthquaker Devices yet, definitely do yourself a favor and check out the Chrysalis overdrive pedal.
00