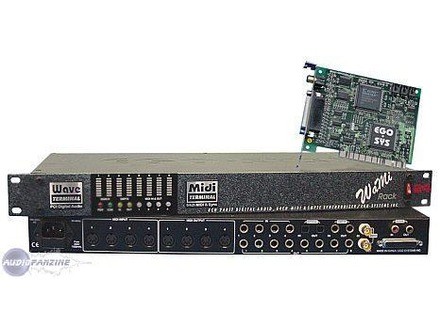 View other reviews for this product:
4 in / 8 out analog
interface numrique
24bits recordable
drivers for GigaStudio
low latency
4 midi in / out quickly to buy another card for MIDI
config: KG7raid / Athlon TB 1400

Their Systm Uninstallation for a driver update is pretty weird.
Of strangeness occurs with VIA chipset motherboard or hybrid AMD / VIA (eg loss of registry renewal at the offset audio + video).
The config gnrale is easy.

The drivers have never t stable on my System. Map rgulirement blocked (but trs random image) the boot of my System. By changing the drivers, arsolvait sometimes my problem.
The drivers are not set day for over a year, given that other products exist. No follow-up, apparently.
I got a latency of 6 ms, 12 ms, but, it happens all the same better.
I've read more than 32 audio tracks simultannes carefree.

I used it for 2 years and died, blocking my DEFINITIONS System.
Apparently this is a hardware problem (initialization is no longer). I replaced by an RME Multiface PCI.
I liked the pseudo led VU nitre in faade and the level of entrerglable by software.
To beginners, I thought that the ratio price quality silent perfect, but since the card lch me after 2 years I saw my trial.
I do not have that choice would do, for sure.
In addition, it heats normment (it is sometimes impossible to leave his hand on the capos as it DGIG heat). Ds is at risk of racking with other instruments.
And the oddities: Why give the card with a fuse of a lack of capacity to the grid ds first ignition of the rack? In short, that happiness ... I could work somehow pdt 2 years, but I spend as much work as that rsoudre lesproblmes poss by this card. Again, may come from my personal config, even when masi ....
See the source
Did you find this review helpful?yesno
Cookies help us improve performance, enhance user experience and deliver our services. By using our services, you agree to our use of cookies. Find out more.