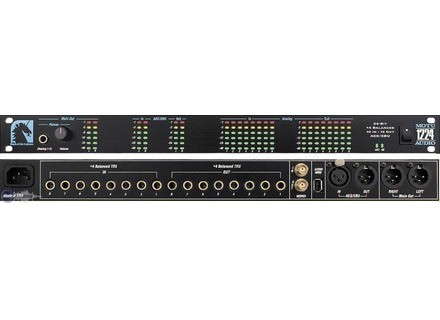 View other reviews for this product:
The Core System MOTU 1224 audio interface is a link to the famous PCI324 card (MOTU heart of the sytem) via a cable AudioWire. Released in 2000 it was worth a bygone era around 15000frs making it the top of the range and MOTU converters equipped with the best of the market (in this price range of course).
The front presents itself as all the MOTU interface system (2408, 24i / o, etc.).: On / off button, LED bargraph display level 8 on each of 8 inputs and 8 outputs and the AES / EBU and the main out and one on the left headphone.

In short: it's high end!

The implementation of the driver on PC (winXpro) and extremely simple .... except ... for users of VIA chipsets (that is, the most part of motherboard for AMD). Hey yes PCI324 card option requires a change either in the BIOS (CPU to PCI option must be POSTWRITE DISABLE). But this little problem has not SPECIFICATIONS 1224 but the entire system MOTU. Rest assured once you modify this option the couple PCI324/1224 runs like clockwork.

Managing card settings is done via the MOTU PCI Audio console where you manage the buffer size, routing options, etc.. There is also a console dnomm CueMix that manages the routing software I / O, but experienced users prefer much used Cubase or Logic for that.

The basic principle here is simplicity and efficiency is not saying no option 96khz crazy, it's simple, accurate, and it works. It is an ideal interface for anyone who wants to lead a project to be on CD or Vinyl produts. Its strong point: The dynamics ... (Jai bcp works on audio interfaces and is by far the most dynamic). Of course today it's hard to rival with the 192HD, but the 1224 has already 5 years old and I do not think in five years 192hd Always take the road!

Personally it is connected to my patch and then a console. I record 8 tracks simultaneously easy to 48khz with latency 0. And what is more accepting of PCI324 3 interfaces can upgrade your system up "has 24 entries!

The MOTU 1224 is an interface by the surprising quality of his converisseurs and dynamic. At a time when manufacturers bcp Courrent to 192kHz of the 1224 after four years of service shows that it is the tjrs through a system with a 48kHz converters faithful and music, and that's the most important .
See the source
Did you find this review helpful?yesno
Cookies help us improve performance, enhance user experience and deliver our services. By using our services, you agree to our use of cookies. Find out more.