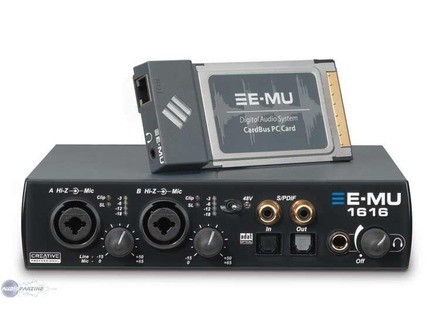 View other reviews for this product:
The Systm PCMCIA, which is closest to the PCI Systm and has proven itself to RME (among others), in a REFERENCE Contents audionumriques card. I did not need to countless inlets and outlets but I wanted MIDI and a product that is part of a semi-pro range.
I use it to make the computer music, sometimes to play live.
I possde a Toshiba M70 208, Pentium M740, 1 Giga of RAM memory, 100 GB, super machine ...
Electric violinist, I possdais a Boss GT8. I go to the DSIR soft. I plug my violin Submitted WOODS Viper on the map, via the Toshiba, and the whole lot of live amplified speakers KRK Rokit 6. No mixing desk. I work also with Sonar and Cubase VST on. CHARACTERISTICS The card was perfect for me, o of the 9 / 10.

In beginners, no problem. Reue in 48 hours through H. Studio (thank you for the fast), the box contains the dock, the PCMCIA card (with his lil tui), the installation CD and software (Cubase LE, Sonar LE etc. ...). I plug before turning on (I dcidment prfre the Systm Firewire PCMCIA and mini-cards ... got personal ...) Installation of drivers and sailing ... Just 5 minutes. No incompatibility with the PCMCIA.
To beginners, I cheek is good, easy to understand. The problem is that the PatchMix (Mixer which can not happen, everything goes through him!) Is daunting and not intuitive. I spent several hours trying to understand how the working Systm: though: the beginners, I plug the violin on one of the two MIC IN and walking, have APRS s the selection between the adquate PatchMix. But when I tried to go through Cubase and Sonar, early run frntique hair: no sound, but we know its not fate o, VST effects (including guitar rig) inaudible the instrumentals vsti a peep. APRS moultes questioned about my mental state and my intellect, my compulsive manual supplied on CD Rom and I understood little small operation. Dj EMU had the good FDI CRER presets for PatchMix to have the console "prt employment." Submitted A, I can play my violin and make the computer music finally not cost my mp3 player on MDIA, all without touching the PatchMix.
As you can see, Emu was not in the simplicity on this console ds but when we understood the Systm, we can stop to take esprer the head and PLAY or listening to music. the 8 / 10 for that bastard PatchMix. Well done.

I p t even see on the site EMU for the time being bathed.
I Nuendo for computer music (used, hum hum) and the Sonar 5 vrai.Je will play live in May and I think the card will not be a problem: several hours to play through the PatchMix alone or coupled with guitar rig: inauduble latency is as clear as crystal. Same squenceurs through the software. I 7ms in 48khz. I had fun with sonar and several instrumentals vsti (8 track in total) and not a breath, not a crack. on the other hand, when I wanted to save the violin on what I did, I changed the PatchMix and crash ... This bug is really unpredictable. For now, experiment with a more guitar electric violin over piano, no problem, this card assure.J &#39;rgl have the problem of mass (when connecting the laptop to the current) with an ungrounded outlet. The sound is powerful, rich in harmonics (well its true for my violin) and my amplified speakers perfectly recreate the default enregistrements.Le and quality of sound reproduction is excellent, the PCHE and good DEFINITIONS. 9 / 10 because the Casing of the card (dock) is a little "plastic", despite a good quality finish. No problem with the PCMCIA card even if it would prfr greater length of cable connecting it with the dock (just one meter).

A week of Use and redcouvre the pleasure of the computer music and play live.
Plus: - quality of sound (the 1616M may be better, but I think the diffrence is noticeable with the hyper pro gear)
- Stability of the card and the opportunity to spend several different applications in a snap (in matrisant PatchMix), no audible latency, we branch is installed and running
- The PCMCIA Systm, little damage is interested manufacturers
minimum: - difficult to tame PatchMix
The cable-card / dock too short
- DSP effects (reverb and equalizer hand in my case) no top: forget the saturated synthetic and messy and morph gadget: it is better to go through good vst (Guitar Rig, AmpliTube or waves among others) to extract the essence of this card and have a sound that kills! Moreover, the DMOS on the site speaks for EMU same ... they would have done better to avoid ...
9 / 10 because perfection exists only in the trade.
I would do this choice, I recall that this card is for the musician wanting to have enough inputs and outputs in order to do work of quality with an average budget, with an ide at the top: one branch , has come!
See the source
Did you find this review helpful?yesno
Cookies help us improve performance, enhance user experience and deliver our services. By using our services, you agree to our use of cookies. Find out more.