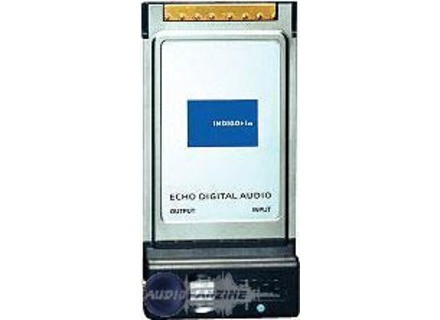 Indigo I/O, PCMCIA Soundcard from Echo in the Indigo series.

View other reviews for this product:
Hello.
I t audiophile owner of a USB, which allowed me to move from fixed to mobile with one card.
What motivated me for this purchase, the PCMCIA and the fact that the card do not need external power supply to operate.
My laptop is a 2.0GHz P4 TEKNEO, 1GB RAM, WinXP Pro 40goDD ... with all the SHIFT
I use it mainly with Forte, and Cubase.
Gold-plated mini-jack connection, has, I admit to some concern but hey, for now, the air aa strong.
I put that 7 mini jack connectors

Installation without problem. It installs the driver, the reboot with the card, and it's good.
I probably worry a little of my laptop (TEKNEO is really the stew, I confirm the words of Bidibule, probably ending for I will change), which is that when I Get You Started with systmatiquement the card, the computer tape on the screen XP. Wild reboot, bios, and activate the power saving off (and all options for the economy of energy), reboot, and it's good ... weird ... but as a work ...
The panel config is super simple, and the big strong point, it is the 4 Virtual In, which allow to use several apps once, or when to route different instruments on diffrent outputs.

Driver ultra stable, I have not had a single crash with the latest driver (taken in March 2004). For updates, for me, as a function I do not ... well, must see.
I mainly use for running high VSTi Plugsound type, native, and Ik ... operates a nickel, no prob, 2.6m latency 16/48 (painfully I reached the 10-11ms with the Audiophile USB), so for me it's all good. 24/96 test yet, will keep you informed.
On Cubase, I have not Russian overloading the map with a lot of audio ('AmpliTube') and the south, with a low latency 3 ms prs, so aa to turn the air .

I use it extensively for 2 weeks.
What I like most is the PCMCIA format, which allows me to reach an unimaginable level of latency with my old card. What I like least, bah .... the mini jack connection also, even if for now, I have no problem.
The map pretty hot too, I do not know if this is normal.
I tried a few before acqurir MODELS, firewire, USB ... is the price I pay that motivated me to buy it, the fact that I e dj a prampli.
I bought it for 190 euros okaz it was new, the person who sold me the problem with qq with another defective card, then replaced, and he sold me ( I confess a little complicated).
With exprience, I remake that choice without prob. It is a value sre.

Update 02/04/03:
Rp yesterday I stepped on the cable without expr, so that t eject the card in full operation ... not cool. It still works (ouf. ..), no problem, except that the cable jack is a little twisted at the fiche.Donc, I confirm, it is small and sturdy (except the ... minijack)

Updated 06/29/04
I changed my laptop, I dsormais a Sony PCG K115Z. No problem at boot, the card is a stability dconcertante, I do sessions of 4-5 hours without crash ... frankly, I stay on my mind, for those who need a card with an output between Stereo and it's really killing the card.
See the source
Did you find this review helpful?yesno