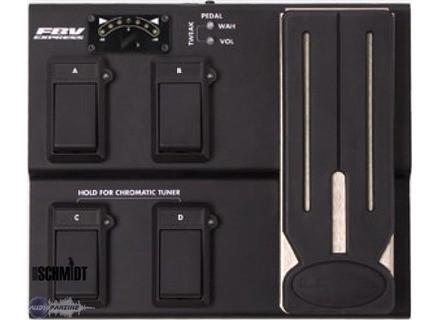 FBV Express, Pedal/Controller from Line 6 in the FBV series.

View other reviews for this product:
I have a friend who has a Spider III (Icky, I know.), and I decided that I would get him this for his birthday. Guitarcenter had one used for $50, so I went ahead and bought it for him. Now, over a year later, it is still holding up just fine. It's pretty neat how well the presets work, and being able to access the tuner from the pedalboard is nice as well.

Another thing that the FBV Express adds to the Spider series of amps is a wah. The expression pedal that is on the right-hand side of the unit can act either as a volume, or press toe-down and you can switch it to a wah. One thing I dislike about it though is that you REALLY have to push down on it to get the wah to activatede-activate. The wah itself sounds decent, better than a stock Dunlop Crybaby to my ears, though, that's not saying much, heh.

The one thing that has started to have problems is the cable that runs from the controller to the amp. It has started to break down., in the form that covers that help provide strain relief for the plugs have come off on both ends, and are now sliding around the cable, and the locking clip on one of the plugs has broken off, therefor it no longer will lock into place. That's really no fault of the cable though, the RJ-45 connector just wasn't meant to take the strain of being used like that. I'm not sure why Line 6 used that particular connector,, I personally would have used a connector type more suited to the application myself.


Overall, this is actually a pretty decent foot controller. I expect that it will hold up over time, besides the cable that is. Now, if I could just get my friend to ditch that amp entirely, heh. Buy it if you need a foot controller for a Spider or POD. Or, better yet, ditch the Spider or POD and get a real amp!
Did you find this review helpful?yesno
Cookies help us improve performance, enhance user experience and deliver our services. By using our services, you agree to our use of cookies. Find out more.