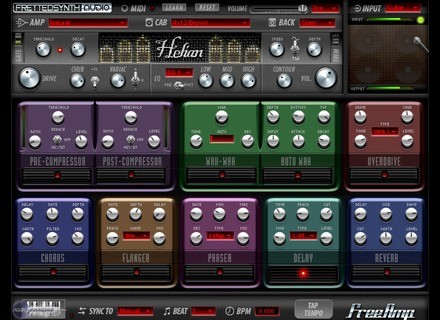 View other reviews for this product:
The Fretted Synth Audio Free Amp 2 has seven different amps types to work with and seven different eq’s that have their own controls. It comes with 128 presets and most of them were usable though some of them just flat out where not very good. Some of the updates that came with version 2 are reduced CPU usage which was a must have because the first version that came out really hogged up a lot of CPU. The only effect that got added on version 2 was flanger.

Installing this plug in is quick and easy and thanks to Fretted Synth Audio, version two is much better than version 1 because it uses 30 percent less CPU. There are two compressors post amp and pre as well as noise gate but most of those features were already on version 1. Being that this plug in is free I recommend getting it right away because there are some unique sounds that it comes with that I didn’t find on some of my favorite amp plug ins. If you have used, or are already using version 1 than this is a must have upgrade due to the CPU usage being reduced.

The layout/ interface of the plug in has not changed much from version 1 but that is ok with me because it was already a good interface. It is easy to use and user friendly. All effects can be synced to the BPM of the song you are working with via the “tap temp” option at the bottom of the plug in. The microphone placement is not the easiest to work with but if you want to spend time on it you will be able to get some decent tones. The overdrive types are also pretty good on the Free Amp 2 plug in. This is one of those plug ins that is a must have, but only because it is free. I am not sure if I would spend money on it though.
Did you find this review helpful?yesno
Cookies help us improve performance, enhance user experience and deliver our services. By using our services, you agree to our use of cookies. Find out more.