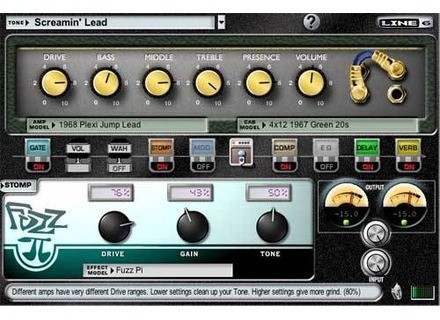 GearBox Plug-in, Software Amp Simulator from Line 6 in the Plug in series.

View other reviews for this product:
Hassle-free installation, the DI included in the software bundle works as a big dongle. You can then use the Gearbox software as a plug-in or in standalone mode. As usual with Line 6, the manual isn't really necessary, since the 'interface of the software is pretty intuitive.

I use it on a Dell XPS, with 4 Gb RAM and a PreSonus FireBox under Windows XP. I have never tried to open 50 Gearbox plug-ins at the same time, but I have used 7 or 8 instances in my projects and it all runs perfectly. Do note however, that it takes quite some time to load the plug-in, surely because it checks the presence of the "dongle."

I've used it for six months and I am very satisfied with it inasmuch as Line 6 modelings provide directly usable sounds. It is not hard at all to get a fat rock or metal sound doubling guitar tracks. The hundreds of sounds available are more than enough for any style and, besides, you can download user presets via the software.

However, the design and usability of the latter could be improved. When used as a plug-in, you'll regret the disappearance of the tuner, which is present in the standalone version. Further, the preset manager isn't the most practical when you have tasted the simplicity of Guitar Rig, for example. Finally, compared to Guitar Rig or ReValver, you have fewer routing and processing possibilities: The effects chain is almost fixed, for instance, and you can't split the signal... But what you lose in terms of freedom, you gain in ease-of-use. And since I almost only use the presets with a reverb here and a compressor there, I can't really say that it annoys me. The same goes for the modelings: It's not a Vintage Amp Room-like raw emulation where you can find the sensations of on an amp, but rather the emulation of a recorded amp. What I mean to say is that the sounds produced by Line 6 plug-ins sound as if they had already been produced, with compression and effects processors. Some may think that's a defect, but for me it's an attribute: What I want is guitar parts that suit my songs nicely and without the need to rack my brains or enrage my neighbors ─ and that's what Line 6 offers me. Whether the JCM 800 sounds like a real JCM 800 or not is something that doesn't really interest me that much...
Did you find this review helpful?yesno
Cookies help us improve performance, enhance user experience and deliver our services. By using our services, you agree to our use of cookies. Find out more.