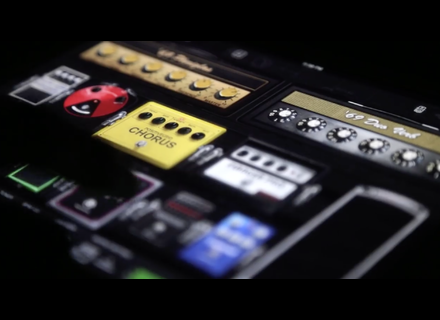 « Bias FX, or how to REALLY replace your amps for 30 euros in the digital »
5

Value For Money : Excellent Audience: Anyone
Let's get straight to the point. Yes, I DO like the sound of valves more that I like their modeled counterparts. Yes, I consider a real rocking distortion means reaching the point when the tubes are about to melt and the drive circuit starts asking for mercy, when the reverb has the speakers shaking and the cab goes crazy with high gain.

Yes - but, now there is BIAS FX, and everything has changed. EVERYTHING.

Just plug your iPad, a device such as the iRig HD (77€ at Amazon), plug it to a sound system, or home cinema, or active studio monitors... Launch the amp and play! Eat sound right in your face, and plenty of it!

You get simulations of famous amps (currently 12), plus 25 effects that can be chained at will (and this is great), and other amps can be imported from the BIAS app (another jewel I recommend, quite often discounted at €5). Ther's also a tuner, 5 effect racks and other huge features like stereo sound or the possibility to deactivate the amp sims when plugging the iPad into a real amp (but think of getting back to mono then).

The best feature is the possibility to choose two amps and chain them, mixing each in the stereo space, and see that each change really does impact the sound. How gorgeous to be able to play an overdriven-to-the-limit JCM800 on the left, while getting on the right the straight and dry sound of a Mesa Triple Rectifier!

Soundwise, it's impressive. I thought I'd be only half convinced as I knew JAM UP from the same editor (which I found nice but really restricted for disto sounds, which sounded a bit cold and messy - as just almost ant comparable simulations). But here, I was agreeably surprised.

All sounds can be useable, after much tweaking directly in the studio, all the more that other apps such as Cubasis or Garage Band can also be used to ignite the mix, which is quite useful for nomad users or those with very little room available at home.

In the end, the most incredible is the quality and realism of sounds, as well as the interface which is a real marvel. Originally interested in buying an Axe FX-type rack, I was totally conquered by this simplee and finally much more efficient and quick approach, almost ideal.
As usual, it's easy to trick a lot of people with a blind testusing several guitar tracks with one of bass and another of drums (and synths/brass depending on the style). I tricked two guitar teachers who didn't believe me. Classic story, but always great to tell. All sounds (rock-oriented or clean) sound great, it's just crazy!

I'll finish with this LOOOOONG review (thanks to those who will read it to the end). I'm still mind-blowned at its quality and ease of use. That's absolutely remarkable. The sound evolution is only noticeable if you own a recent interface such as Line 6 Port or iRig HD (the first iRig doesn't reveal a real sound evolution between the JAM UP app and BIAS FX). But, with one of the aforementioned modules, the result will be perceived, pushing JAM UP into retirement. It seems crucial to buy BIAS, the app which allows to create an amp from scratch very simply and which integrates perfectly in BIAS FX. It adds the possibility to get presets for famous artists through the cloud, and also (through its TONE MATCH function) to get captured sounds from real amps like with a Kemper (the real sound is captured out of the amp then digitized): a real kill.

A "must-have" for all guitar player with little money to spend who wish to have fun and compose. Used with iOS 8.2 and an iPad Mini Retina 2. No lag, slow down or bug to report. I think the desktop version for Macs (and maybe PCs) should be a revolution, due to how it brings (at least in theory) the best of both worlds (the Axe FX's sound possibilities and Kemper's possibility to share modelizations of legendary amps with other users).
Did you find this review helpful?yesno
Cookies help us improve performance, enhance user experience and deliver our services. By using our services, you agree to our use of cookies. Find out more.