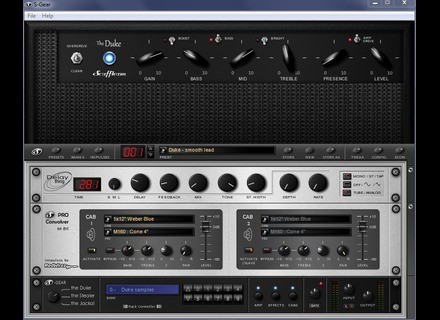 S-Gear, Software Amp Simulator from Scuffham in the S-Gear series.

The debut software from Scuffham Amps is now available for Mac OS X as a plug-in and standalone application.

Each  S-Gear  amplifier is said to have  its  own  character:

A  special  feature  of  each  S-Gear  amp  is  the Tweak panel, providing control of dynamic power amp characteristics like sag and high-cut.

Scuffham Amps also have features such as the Z Control on the Pro Convolver, allowing control over  the  impedance output effect of  the  tube amp.