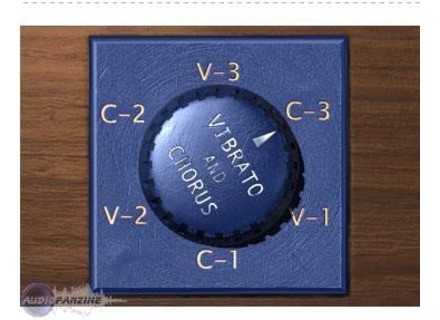 « Easy and effective chorus and vibrato »
5

View other reviews for this product:
As long as you are relatively comfortable with installing plug-ins then it should be a breeze.
You really don't need a manual for this plug-in, it really is that simple!
It's a one knob style interface so that's what you get, one knob and it's right there, so yep it's definitely easily accessible!

I've been using it for 6 or 7 years now and I've never really had any issues with it. If you want to use 2 or more instances though you need to make sure your computer is up to the task, this plug-in is fairly CPU hungry for such a simple plug-in.
I have not tried using this one outside of Pro-Tools so you may have other performance problems or not when used with other DAWs.

The thing that I like most about this plug-in is the vibrato, the thing I like least is the chorus. I think that the vibrato function is alot more clean and realistic compared to a high end external stompbox model than the chorus is. The chorus always seems to become a little thin which is an understandable issue yet this plug-in just isn't rich enough while using it's chorus modes. The Vibrato functions sound much more lush and don't color/thin the sound quite as much.
If you got this plug-in with a Bomb-Factory bundle or for free then the price is right!
I've used several external vibrato and chorus pedals for my guitar rig over the years. I would rate the vibrato function of this plug-in to be just shy of the quality that I've gotten out of a floor model in the past, and obviously much cheaper. The chorus just falls short of my expectations, if you don't have any other chorus plug-ins then use this one; it's not terrible.
Did you find this review helpful?yesno
Cookies help us improve performance, enhance user experience and deliver our services. By using our services, you agree to our use of cookies. Find out more.