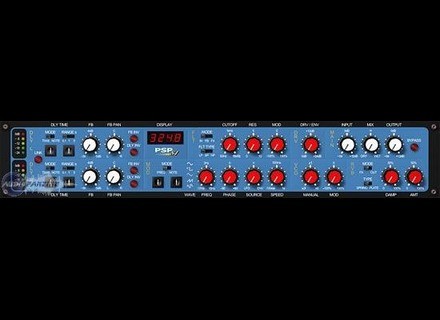 View other reviews for this product:
So far there has been no compatibility issues.  This, like many plugins out there, is a reproduction of a real Hardware rack unit.  Because of that, I haven't used the manual as I have used a few real delay devices before.  Most of the virtual reproductions of hardware devices are fairly simple but this sucker has a lot of options on it, more than I am used to when it comes to a delay unit.  Once you look at it and play with it for a little while though, it becomes far less daunting.  All the functions are right in front of you, however, I hope all plugin designer adopt Logic 9's option of increasing the size of the plugin, therefore making it easier to see.  I feel sometimes I am squinting at the computer screen trying to see exactly what I am selecting.  Kind of a pain.  Other than that, its pretty easy to use.

The software works correctly in Logic 9 and Ableton 8.  So far I haven't had any crashes or lost presets.  As for performance, I have to say I really like the sounds of this delay.  Because of the "VCO-SWEEP" option, you can really tweak the delayed sound itself.  Overall, I give it a 10 out of 10.  I am sure the real deal sounds better but I haven't had the privilege, but I have to say I find myself using this delay on a lot of tracks, especially synths.  I have been using this synth for about a year.

What I like about this most is the VCO Sweep option I mentioned earlier.  I don't think any other delay I own gives me this option.  It basically causes the delay time to rise, rise and fall, or fall according to how you set it up.  It also causes some pitch shifting too.  Overall, its kinda of a hard option to really dial something in that you are wanting but it is fun to experiment and make some whacky sounds.  1 out of 5 times I do that, I get something I like.
This is one of my studio partners plugins, I do not know how much he paid for it.  The sound quality is spot on, I give it a 10 out of 10.  I have used a host of delay programs such as Logic and ableton's built in options as well as PSP's 608 multi delay.  This one is a good competitor for all of those and I definitely love to use it when I feel like making crazy sounds.  Yes, I would definitely buy this one if I didn't have access to it already.