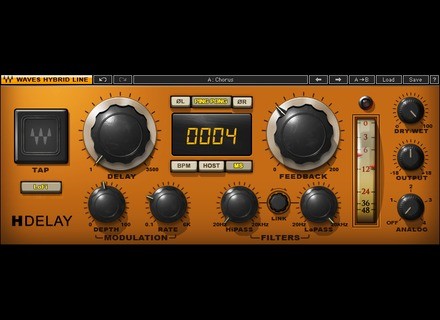 View other reviews for this product:
James...

Publié le 08/12/11 à 15:15
This is supposedly Waves all purpose delay unit. Whether you wan analog, digital, or just plain weird sound from you delays this is the unit they have to go to. Traditionally Waves plugins are in the hifi realm of things and I think they realized that most users don't want their delays to sound hifi all the time. With this delay you can theoretically dial in whatever kind you want.

Waves manuals are always pretty useful and this one is no exception, but unless you've never used a delay or an analog delay, you probably don't need it. There's no real surprises on this vst as far as I'm concerned.

Waves plugins are generally stable and not ram hogs. There are a few exceptions but H delay runs smoothly all the time for me. I've been using it for a little over a year now and it seems like I just keep bringing it up more and more. Once you learn how to get the goods it becomes addictive.

I really like to use delays on my instruments. But historically a lot of the ones I've tried end up sounding too digital. That's understandable because it's hard to emulate warm analog delay sounds with a vst. I've been through my fair share of wannabes. In general I find most of them to lack transparency and warmth. They make then tracks sound worse than they were before. H delay sounds great though. Not only can I get a warm analog delay out of it, I can tweak the heck out of it too. The integration between digital and analog style delays is really unique. You can get super lofi repeats or pristine warm delays, or anywhere in between. The tap feature for me is a must have. I wouldn't do without it. I just love how tweakable it is since I'm very serious about my delays. I'm not really into any of the wacky sounds but they are there if you want. There's some good ambient stuff to be had if you are patient. Overall I would recommend this to anyone who wants a good delay. No matter what you need you can get it from this plugin. So I feel like I can give it top marks.
10