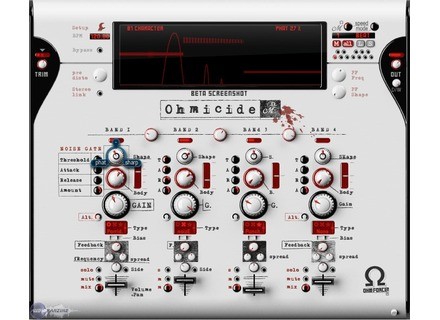 Buy this productView price information >
View other reviews for this product:
The process of installing Ohm Force's Ohmicide: Melohman wasn't hard at all as it was the same basic process of installing any problem.  Simply engage the file and follow the instructions.  I didn't have any compatiiblity issues or any other problems and was able to use the plug-in in Pro Tools within about five or ten minutes from downloading and installing the plug-in.  While I woudln't say that the interface is complicated, there are a ton of parameters to work with so it did take me a little while to get used to everything going on.  Since it is a distortion plug-in primarily, it has all sorts of ways to distort your signal and then also has four bands of compression that each have both basic dynamic parameters and some non traditional ones.  While I haven't seen the manual, if you are new to compression it would definitely check it out as I'm sure it has a lot to offer about this unique compressor.

Within the current set up that I have, I'm able to run this plug-in without any problems.  I am running Ohm Force Ohmicide: Melohman on a Mac Book Pro that has a 2.2 Ghz Intel Core 2 Duo processor and 4 GB of RAM.  I run the plug-in in Pro Tools LE 7.4 that runs with a Digi 002 R audio interface.  I can't say that I have too many complaints about the performance that I getting with this configuration and this plug-in.  However, this plug-in does take up a decent amount of processing power and for me it isn't possible to go crazy with it.  I can probably run four or five of these in a single session within my configuration until it starts to slow things down.

All in all, I would definitely recommend checking out Ohm Force Ohmicide: Melohman.  It has an overall very cool sound and offers tons and tons of setting controls so the amount of variation you can get in terms of tone is outstanding.  If you buy this plug-in in a bunlde as I did, it is a heck of a deal but it is a good deal on its own as well.  While I'm usually not a fan of digital distortion, Ohm Force has done a great job here in making this work.  I love having so much control over my tone and the ability to get so many awesome and versatile sound within a single plug-in.  I'd definitely recommend taking a look into Ohmicide as it is overall a very cool sounding plug-in...